Readers of yesterday’s edition will know that I was up early on Saturday morning. Up well before 4 am on the veranda with my mug of coffee so that I would be at our build in Ambergris Caye, Belize for the final big concrete pour for our house. The roof.

After too many mugs of coffee I eventually showered, shaved and dressed and set off at 6.05 am- with my trusty camera of course- in the golf cart and got to the site in Tres Cocos at 6.20 am to find the guys already at work. They had started at 6 am to reduce the time working under the hot sun. Very sensible.

In the background Nicholas’s sound system was ‘hard at work’ blasting out (literary license here for effect – the volume was actually quite low) both local and international sounds. All with a fast beat though. I mention the music because when the build first started Daniel asked if we objected to the guys playing music. Apparently previous clients of his had objected to it. Our response was “let the music play”.

Have some fun, count how many guys forming the tower. Pretty labour intensive.

Below the tower operated a team of seven of the guys mixing the concrete. One (Martin) on filling the buckets with sand although helped by Wayne who was on cement bag duty. Three on filling buckets with shingle and emptying both the shingle and sand in to the ‘mixer. They also had accountability for keeping the water butts full. The three on this task were Angel, Nicholas (one of the two pairs of brothers on our build in Ambergris Caye, Belize) and Sam. These three work together quite a lot and appear not only to work very effectively as a team but they also get on well and have fun whilst they are working. And the seventh guy operating the ‘mixer (still haven’t found out his name).

The ‘mixer and ‘feeding’ team at work.

Angel putting his back in to it filling a bucket with shingle. 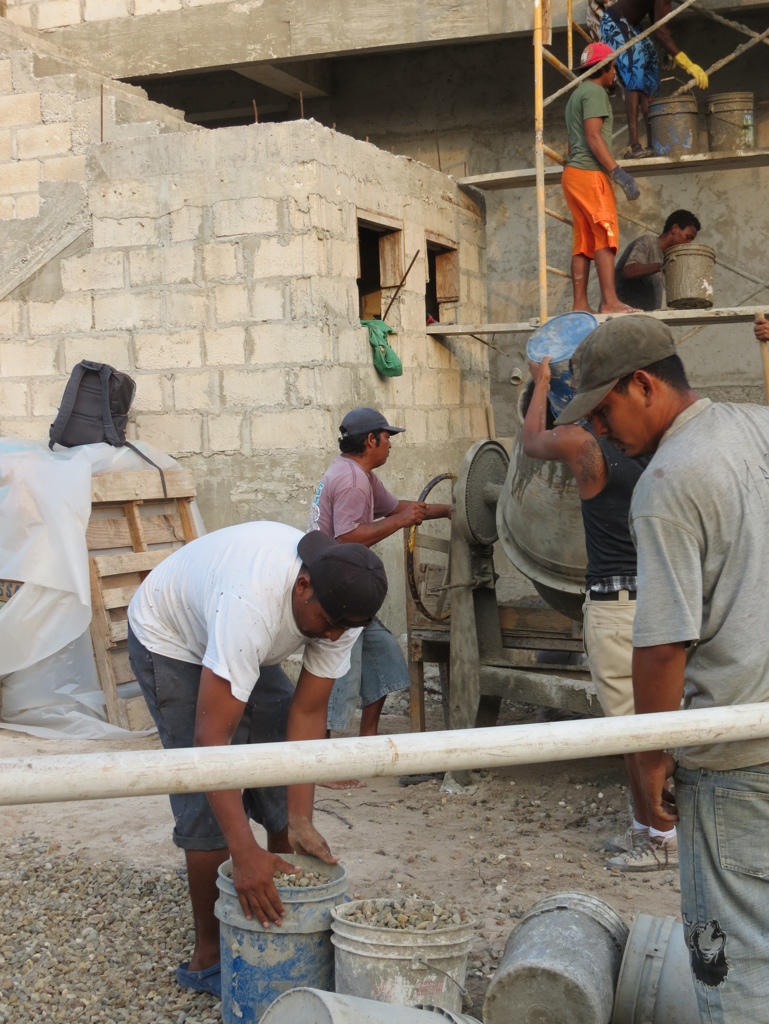 Sam preparing to empty the shingle in to the mixer.

Pouring for the south-east corner of the roof. 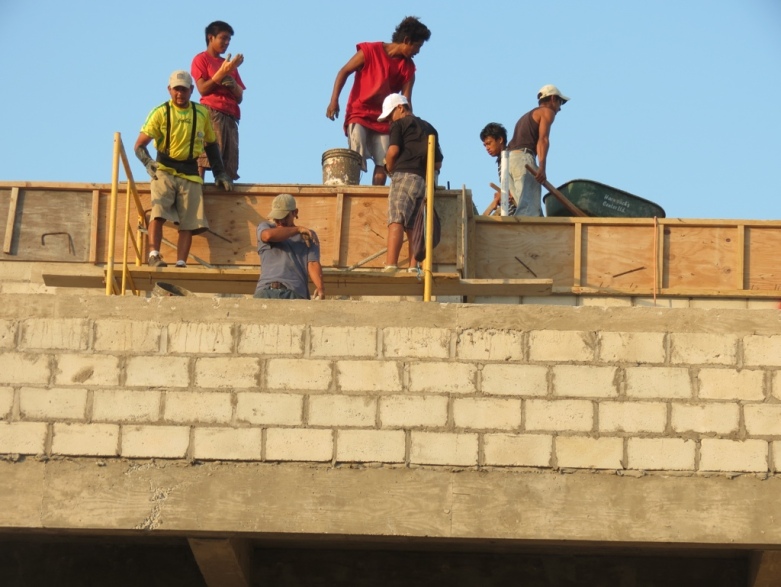 With no connection to mains water (hence the 25,000 gallon rainwater collection tank under the house) all water for the build has to be delivered and this much needed material was delivered whilst I was at our build in Ambergris Caye, Belize. 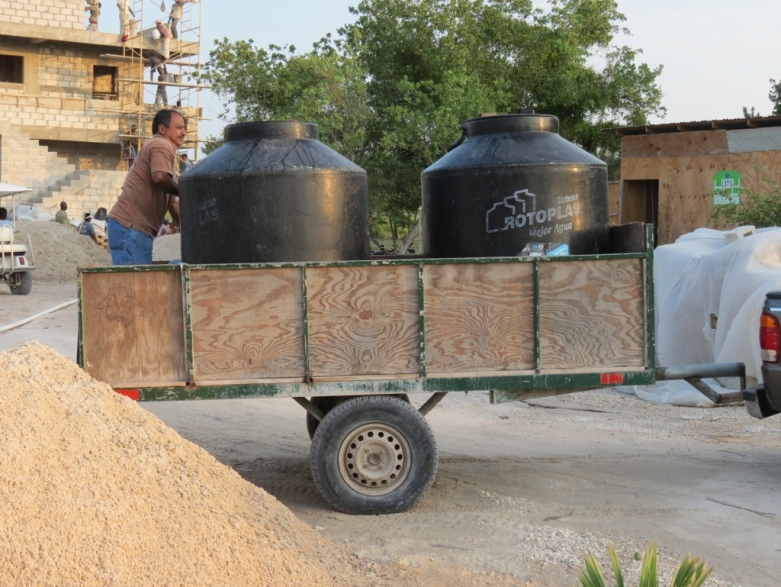 Water truck manoeuvres in to position.

Place the pump in to the container. 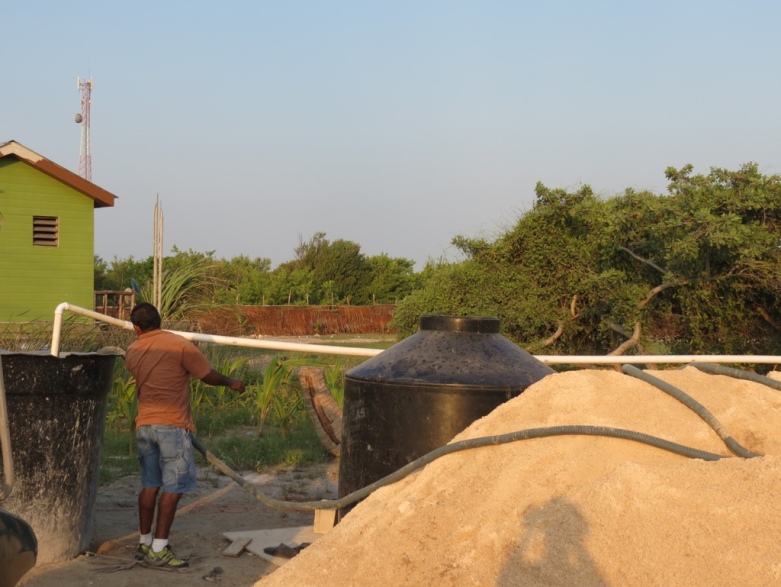 And let the water flow.

Looking back at the build I could see the guys ‘downing tools’ and heading in my direction. The food truck (OK, golf cart) had arrived. 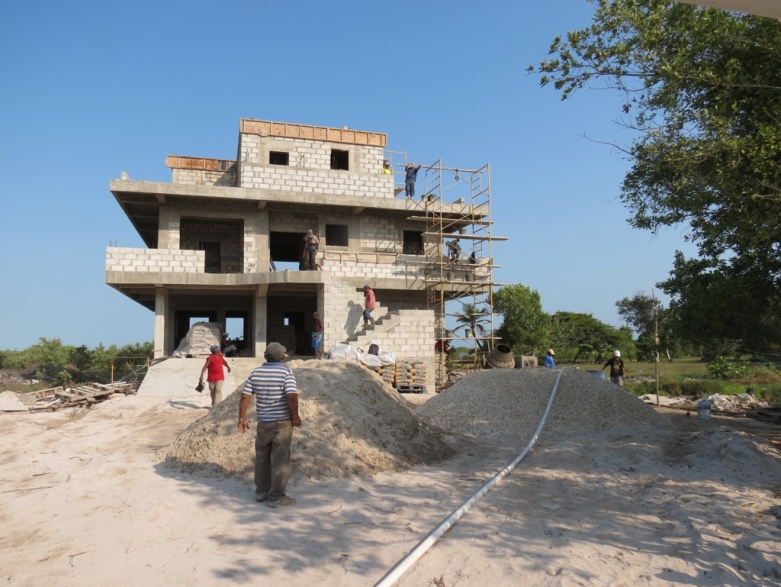 Guys scurrying down the stairs and scaffolding.

And running to the food truck. You can see why Daniel Camal , our building contractor is the boss. He got there first! 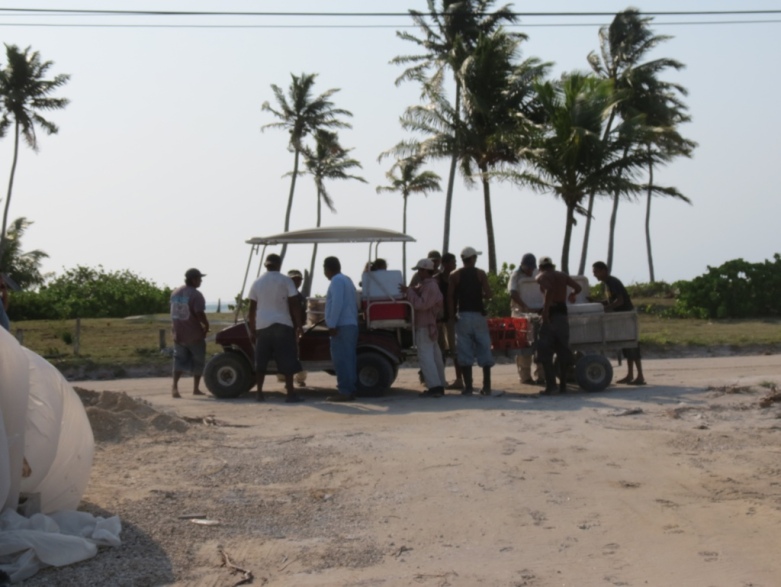 And in a very orderly queue the guys chose their lunch.

They each found their eating spots – some in the house and some under the trees- ate and drank very quickly and were back at work within twenty minutes.

Watching the guys eat had made me feel ravenous so I decided to head off home for breakfast.

Knowing that the roof was a ‘no go’ area for Rose and I whilst the pour was in progress we waited until around 3 pm (the guys were targeting a 1 pm finish) before heading back to Tres Cocos and I was able to get up on the scaffolding on the Second Floor (positioned in the north-west corner) to take a few shots of the completed roof. 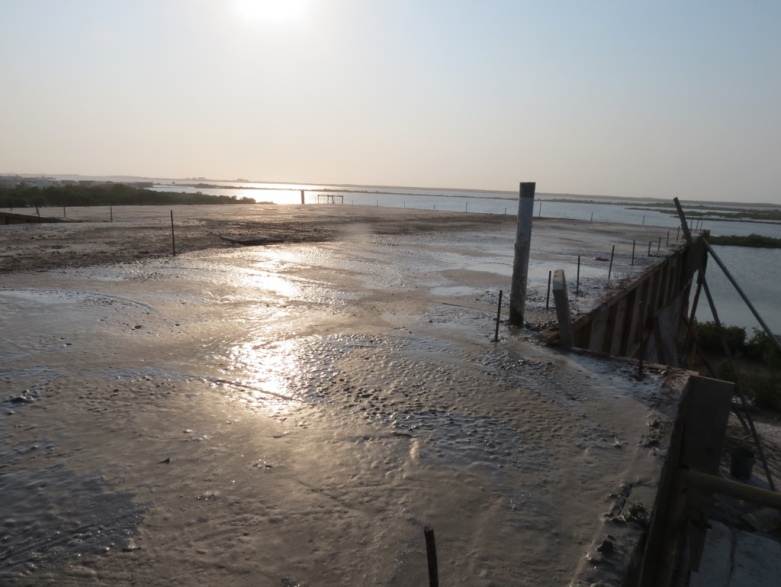 Looking across to the south-west corner. 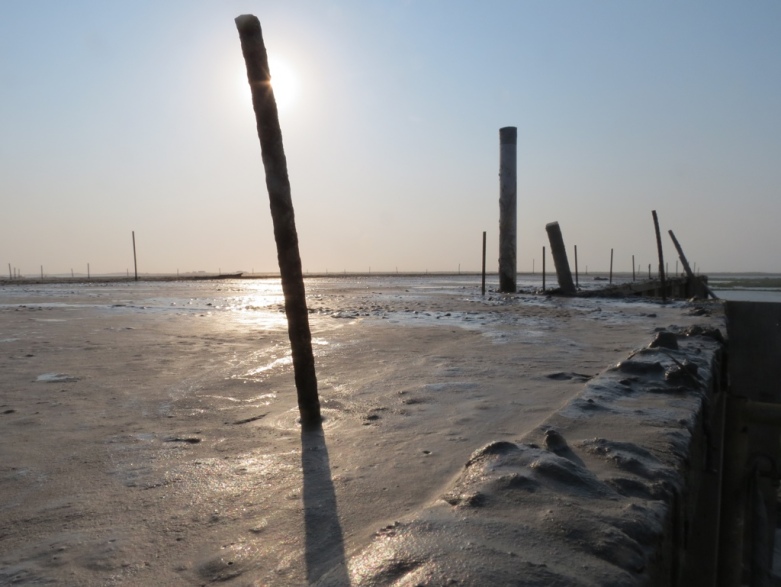 With the roof pour finished Rose and I are really looking forward to the plastering starting in earnest next week. Let’s see those concrete blocks covered!

The headline is based on the 1983 single by Shannon which reached number eight in the US Billboard Hot 100, number fourteen in the UK Singles Chart and number one in the US Hot Dance Club Songs chart.