Not up until 6 am today. The after effect of celebrating our anniversary a bit too enthusiastically. The first mug of coffee appeared to have no boosting affect whatsoever. The second one did, however, marginally improve how I felt. It’s true to say though that I have felt a lot,lot better. Not looking for sympathy though. I brought it all upon myself.

Feeling on the way to revitalisation I showered, shaved, brushed teeth, got dressed (yes,I can do all of this for myself) and headed off to our build in Ambergris Caye, Belize and within two or three minutes of the journey I realised that I should have put on a sweat top. It was chilly, very chilly. Nowhere near as cold as days I experienced in England but I am obviously starting to become acclimatised and now feel a drop in the temperature more. But being a hardy soul I continued with my journey and got to the build just after 7.30 am.

Parking the golf cart I could see the mixer at work with the guys on ‘bucket duty’ taking a break in between loads. 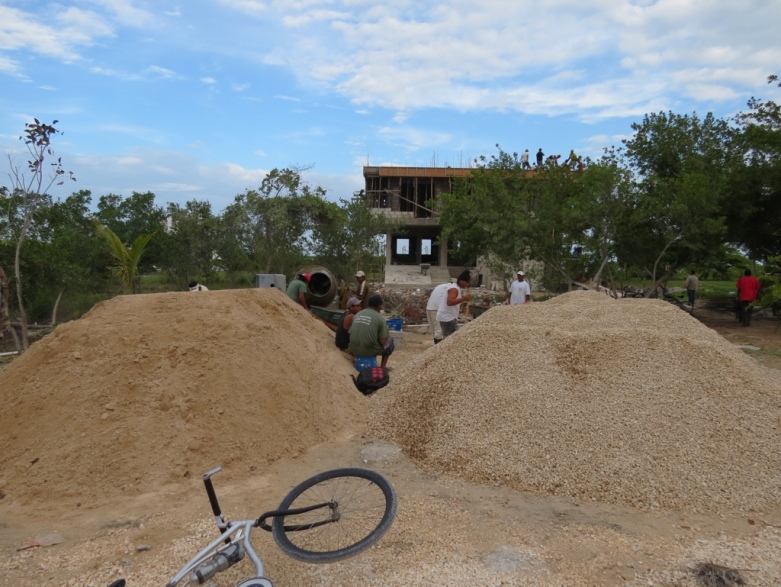 Try and remember the size of the piles of sand and shingle.

A quick walk around the back of the bodega so as not to disrupt the guys on the wheelbarrows and I could see a human tower lifting buckets from pairs of hands to pairs of hands. 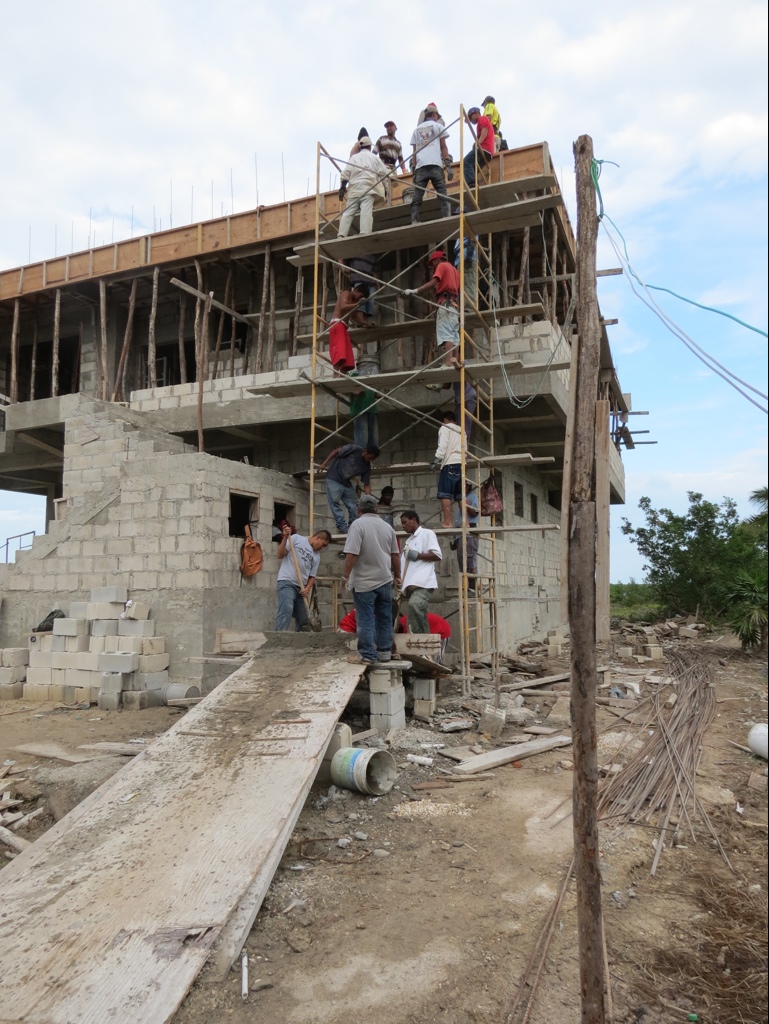 From bottom to top (excluding the guys on the Second Floor/roof) there are nineteen guys.

The same process of ‘delivery for the concrete as was used for the First Floor was used today. But this time they had to lift it higher. Much higher. 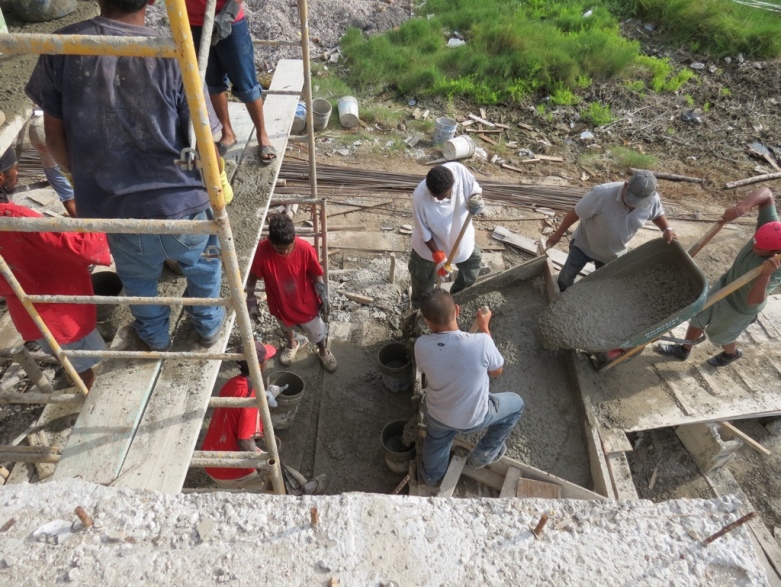 Empty the wheelbarrow into the tray and then into the buckets. 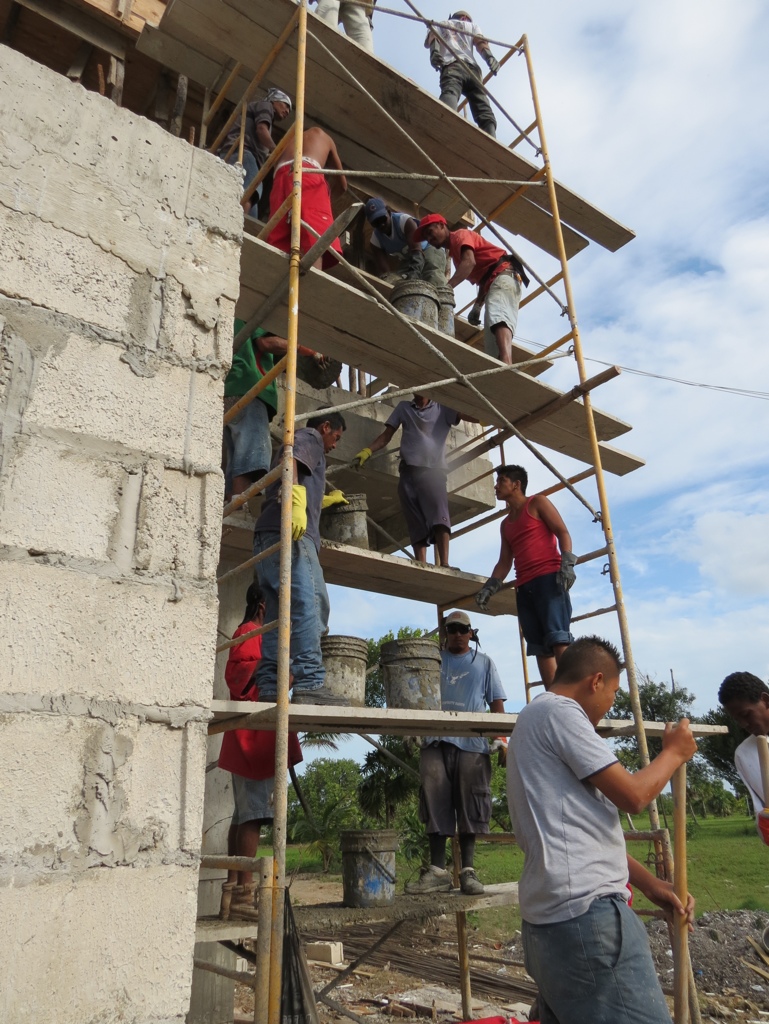 I was just ready to see if I could find a place on the Second Floor/roof without getting in the guy’s way when they started to leave our build in Ambergris Caye, Belize and walk to the road. What was this? A strike? No. Just that the food cart had arrived. Time for a late breakfast or early lunch. 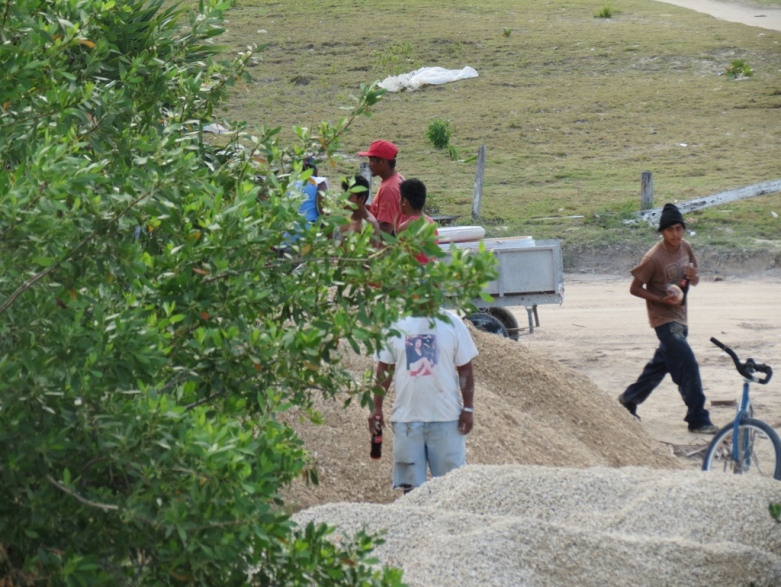 The cart did a roaring trade. 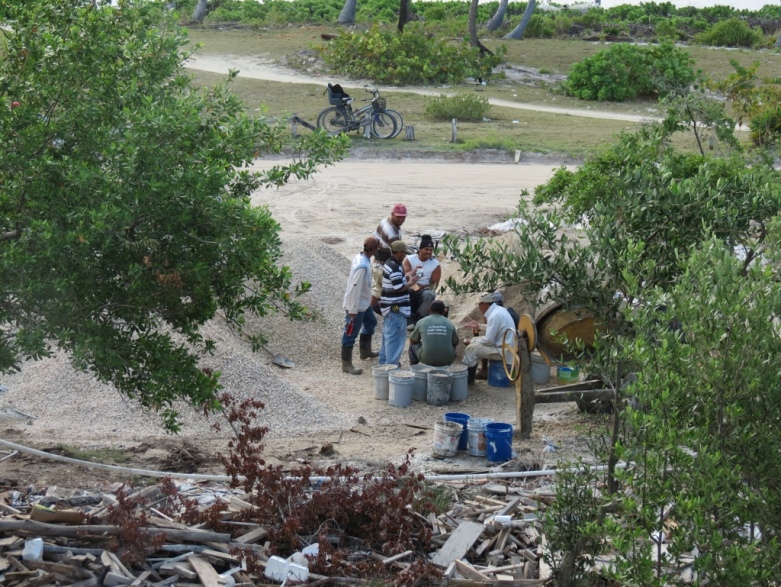 Having a laugh between bites.

Seeing that they would be occupied for a little while I made my way speedily up the scaffold and when I got to the top I could see that they had virtually finished the pour of concrete for the western (lagoon) side veranda. 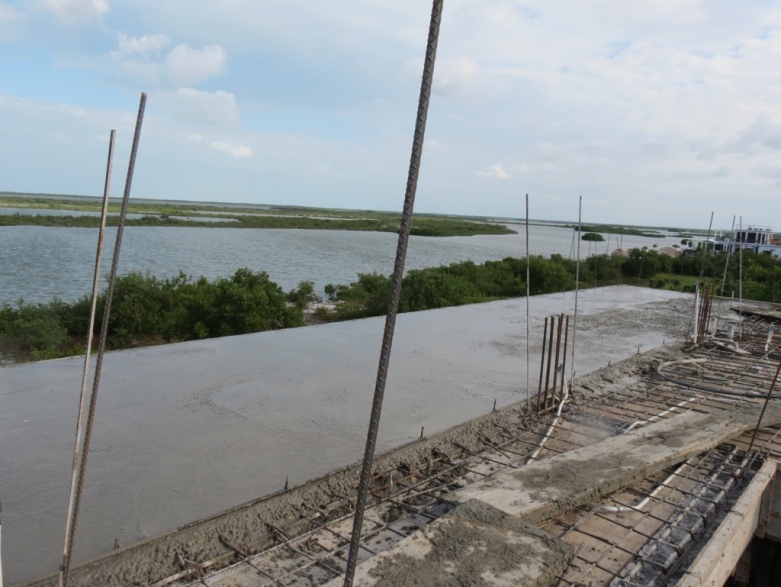 I then looked to see what approach they were taking for the pour. 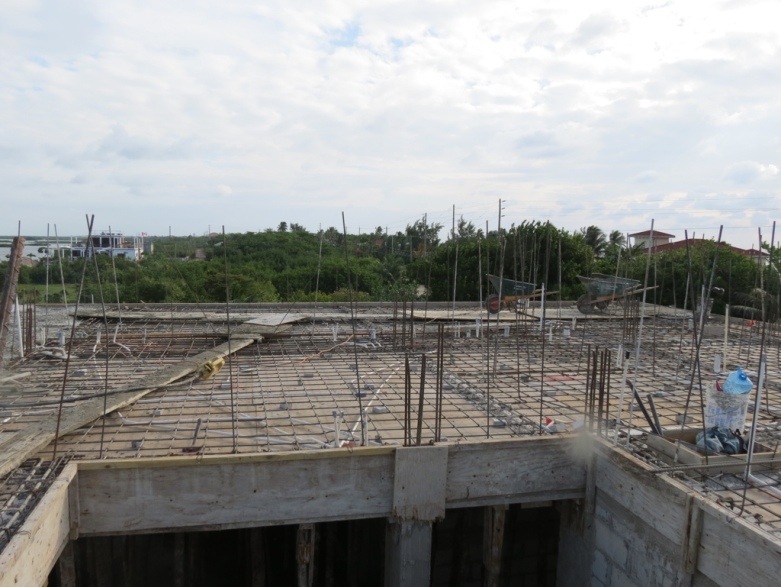 Wheelbarrow loading point in the north-eastern corner and then a ‘boardwalk’ to where it has to be poured.

Hearing a shout I looked down. 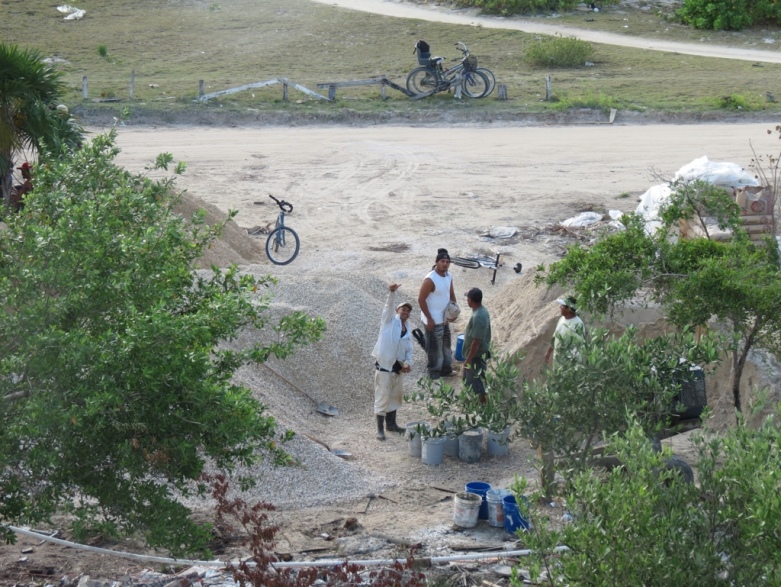 Anhill letting me know that he had seen me.

Break over they guys resumed work and the pour recommenced and I managed to get a few shots before they got too close to me. 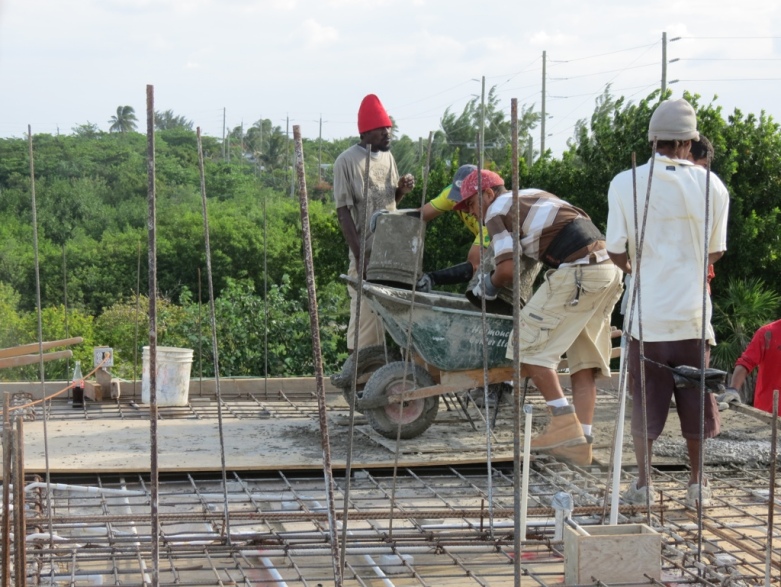 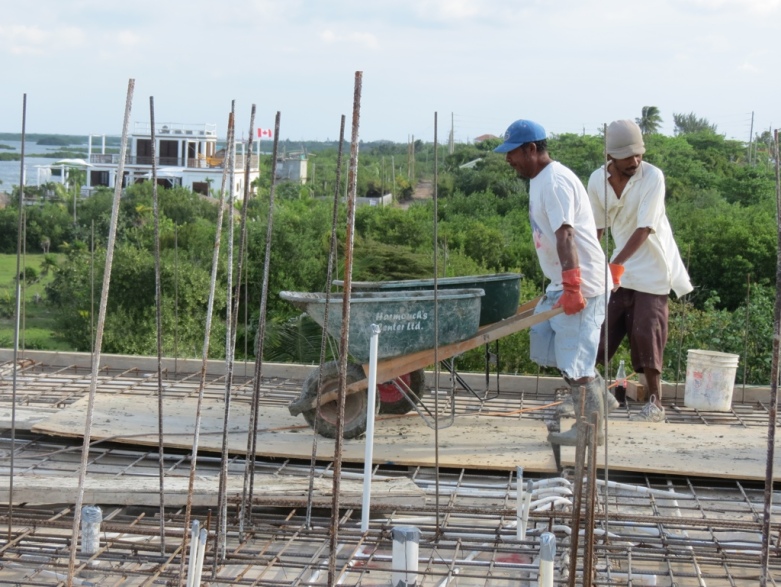 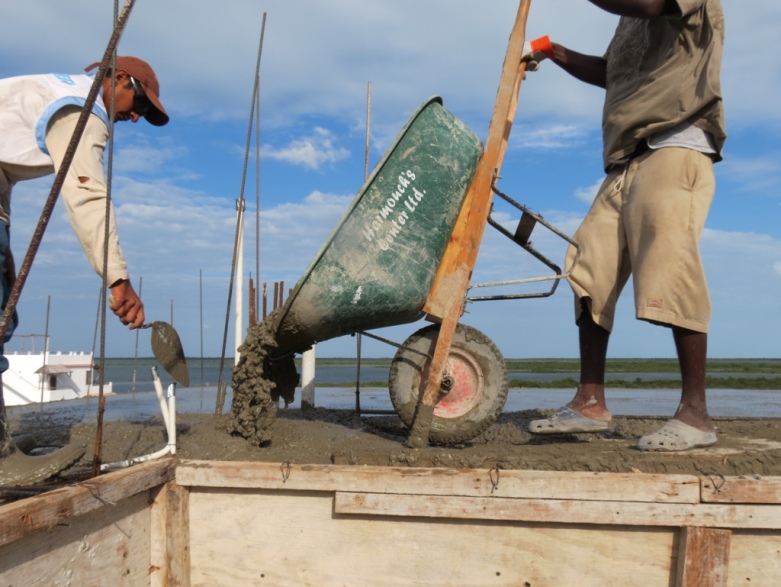 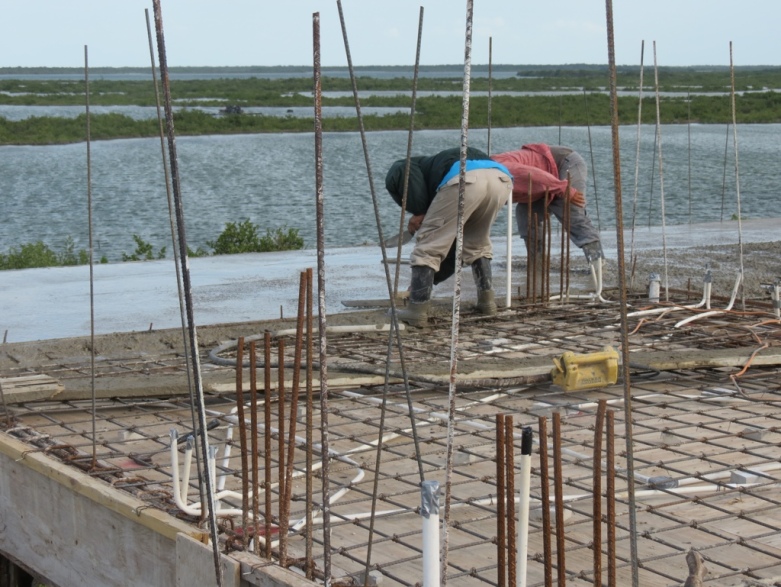 Not wishing to be in the way I retreated to watch the guys on the ‘mixer. They have a routine that is at times balletic. 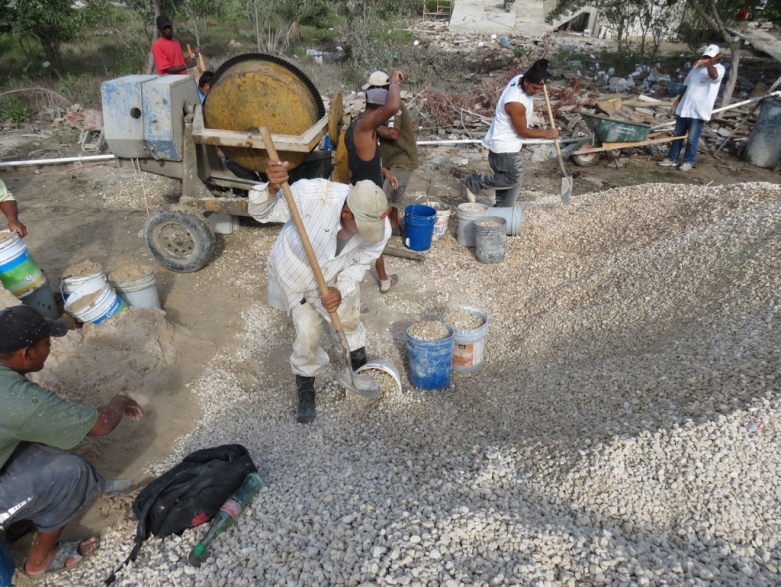 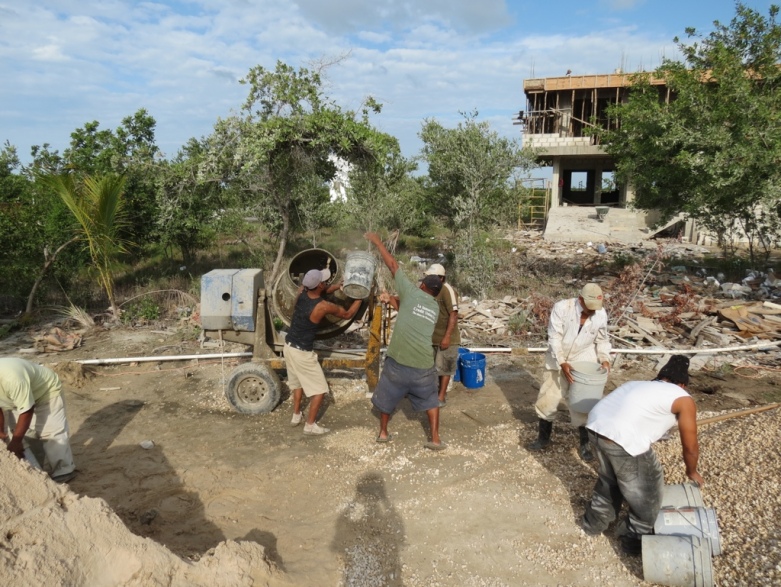 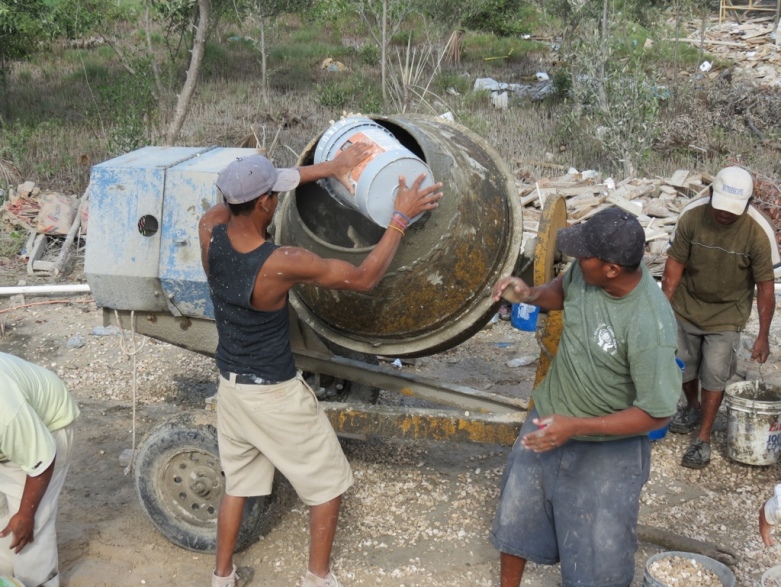 In to the ‘mixer. 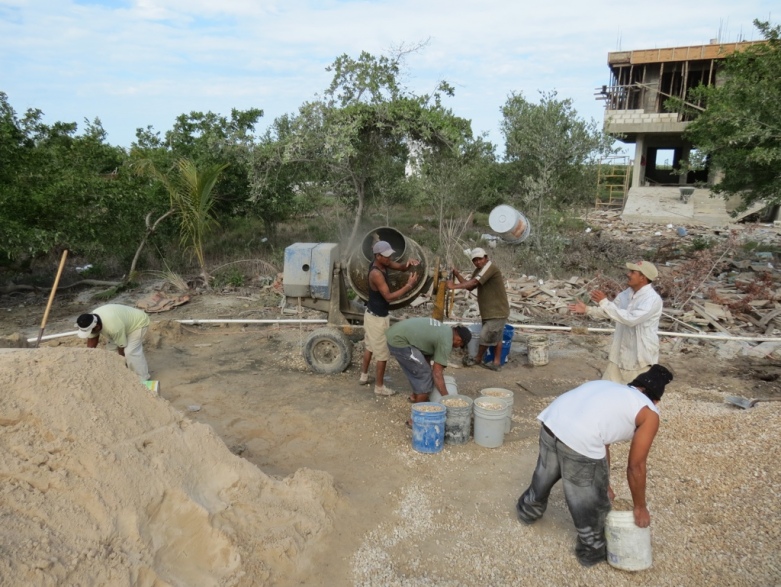 “Fill that one up for me. Please”.

Feeling tired just watching the guys – and there forty of them working today- I headed home for a late breakfast. Suitably refreshed Rose and I took care of a few things before heading back to our build in Ambergris Caye, Belize so that Rose could see and enjoy the experience.

With so much activity going on at the top of the house Rose decided that it was best that she did not climb up. I did though and am pleased that I did because they had made real progress while I had been away. 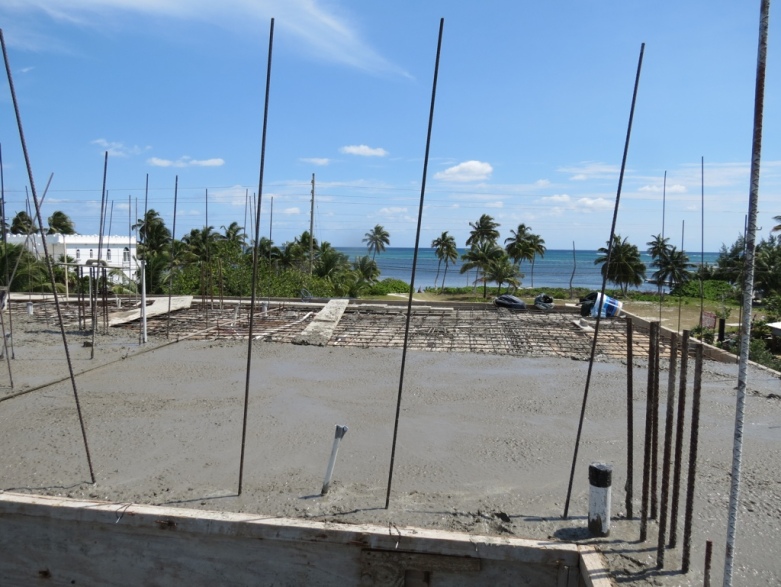 Floor poured east of the stairwell. 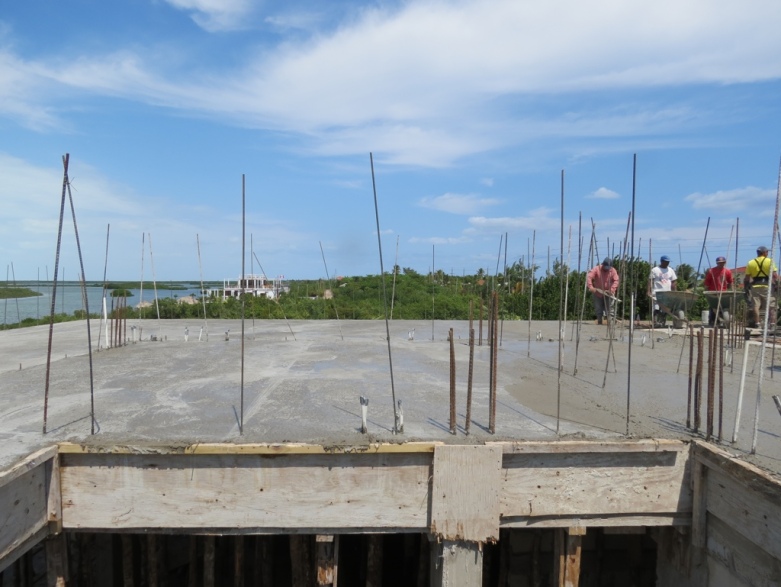 Looking good on the northern side of the house.

As they moved closer to the eastern side it became more crowded. 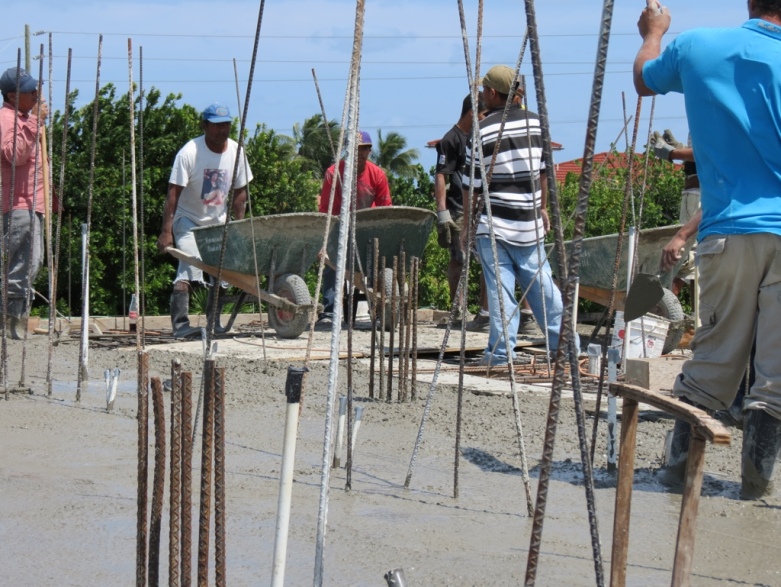 You could just about swing a cat! 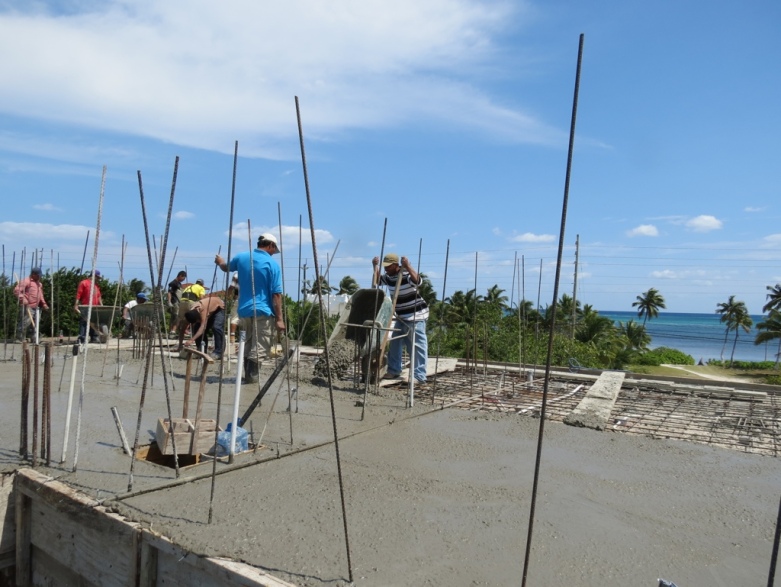 But still the pour went on. 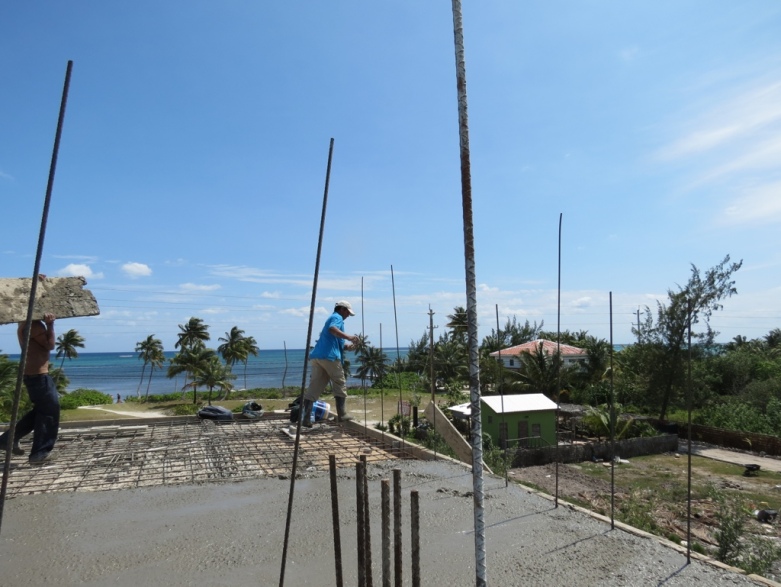 Disposing of boards no longer needed using the quickest route.

It was becoming more and more crowded and I decided it was best for me to withdraw but not before I saw Zapeda removing air from the cincrte by giving it the good vibrations. 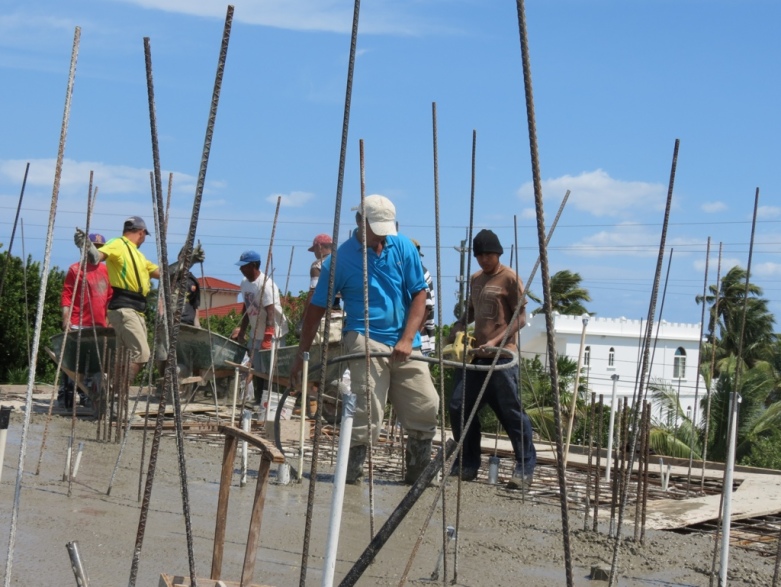 Oh, do you remember the piles of sand and shingle at the beginning of this edition? Well, when Rose and I left our build at 1.30 pm, with around one hour to complete the pour, they looked like this. 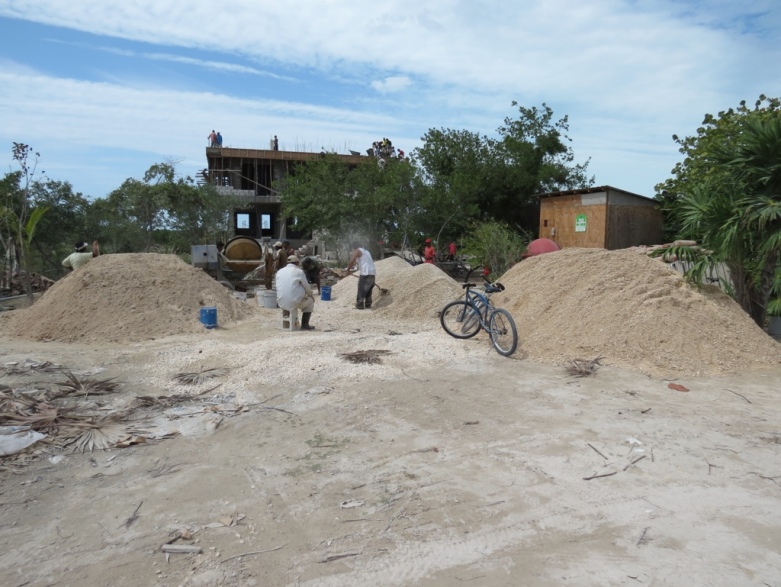 We have got a busy day tomorrow but we are going to do our utmost to visit the build to take a look at the completed pour. Obviously there will be a few photos if we do. If not, I will have to take a photo or two of my lunch!

The headline is based on the 1966 single by The Beach Boys which reached number one in the US Billboard Hot 100 and the UK Singles Chart.