Sitting on the veranda this morning with my friend Mr Coffee at around 4.45 pm I realised what a wonderful day it was. Why? Well, it was thirty-eight years ago today that I met Rose for the very first time. We met at a bar called The Horns in Shoreditch. She was the best looking girl in the room . And she still is (now that should make up for not getting an anniversary card. Hopefully?).

I mentioned in yesterday’s edition that when I was up on the roof I got a good view of the road that there has been a great amount of comment about on the Ambergris Caye Forum.

It starts just in front of the Bamboo House, our soon-to-be-neighbour Bertrand’s house, and runs through to where a right will take you to the Palapa Bar and Grill and straight ahead will eventually take you to Grand Caribe. 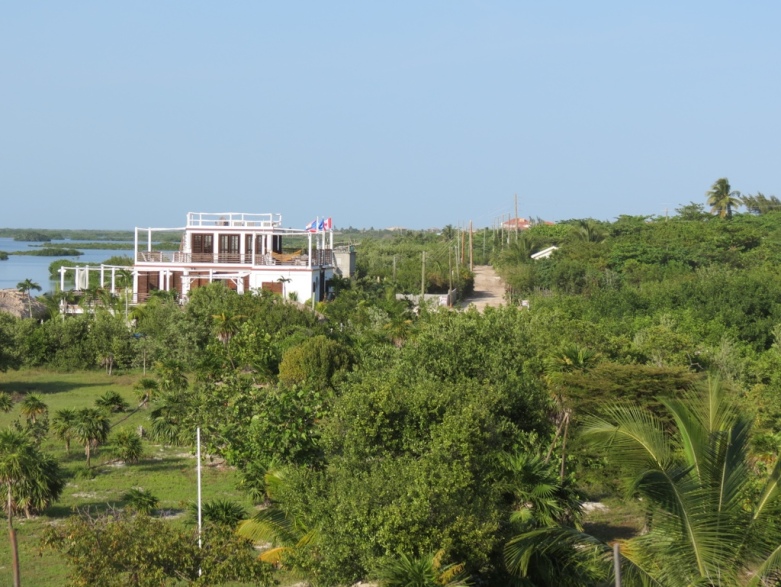 Bamboo House is to the left of the newly cleared road. 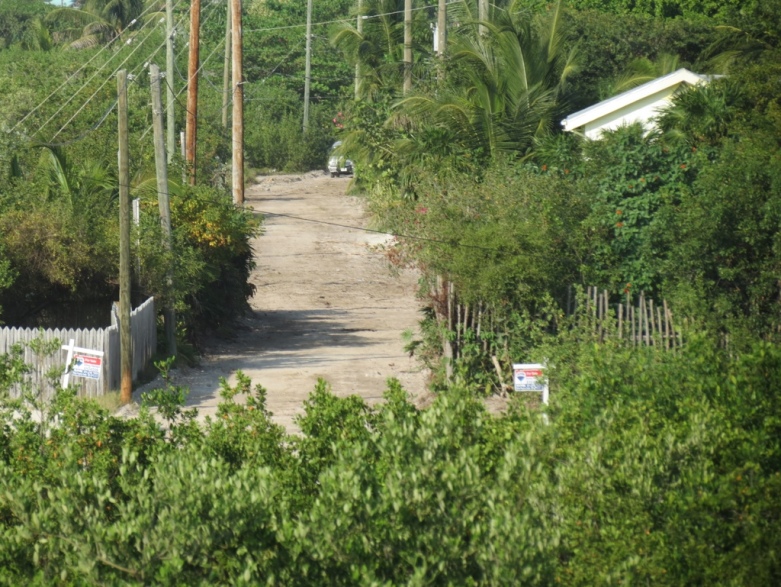 A closer view of the road. 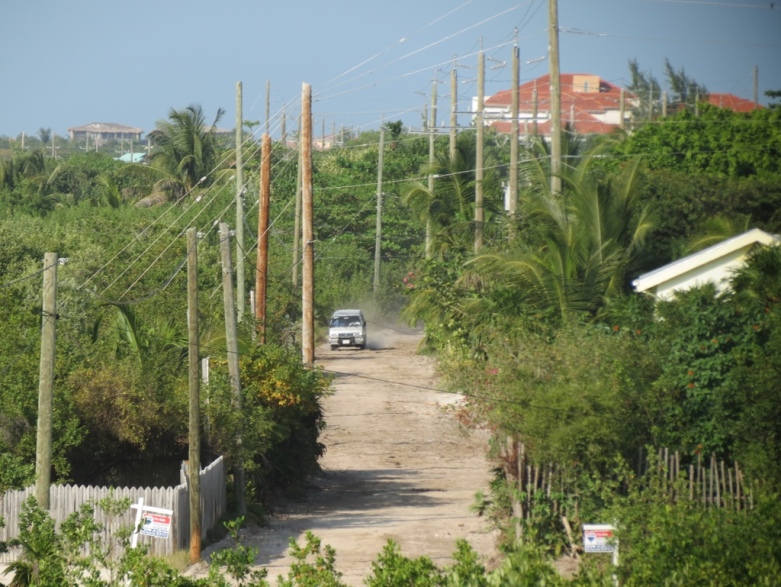 In use with a van. 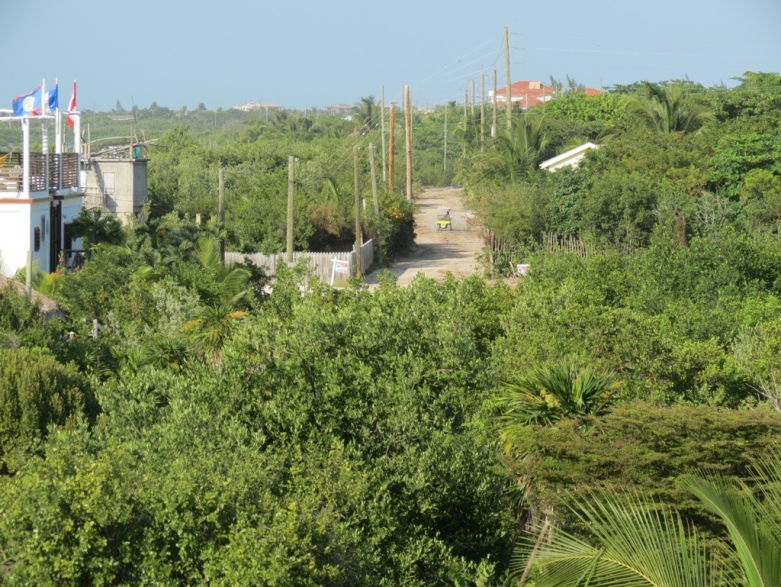 And minutes later a golf cart.

Rose and I spent a bit of the morning preparing the spare bedroom for the arrival of Jane and Brian, friends from the UK who are going to stay in our condo when we head off on Monday for our two week trip to Dallas and surrounding areas. Not a bad day to be doing stuff like this because the temperature had dropped quite a lot when compared to the last few days and it was grey and overcast with always a hint of rain in the air (it did rain last night around midnight and was raining at around 3 am when I awoke briefly).

With the spare bedroom organised I travelled to town to pay the Internet and cable TV bills at Coral Cable’s office in Pescador Drive. Hearing the sound of a hammer as I was walking down the street I peeked over the fence to see what the cause of the noise was. 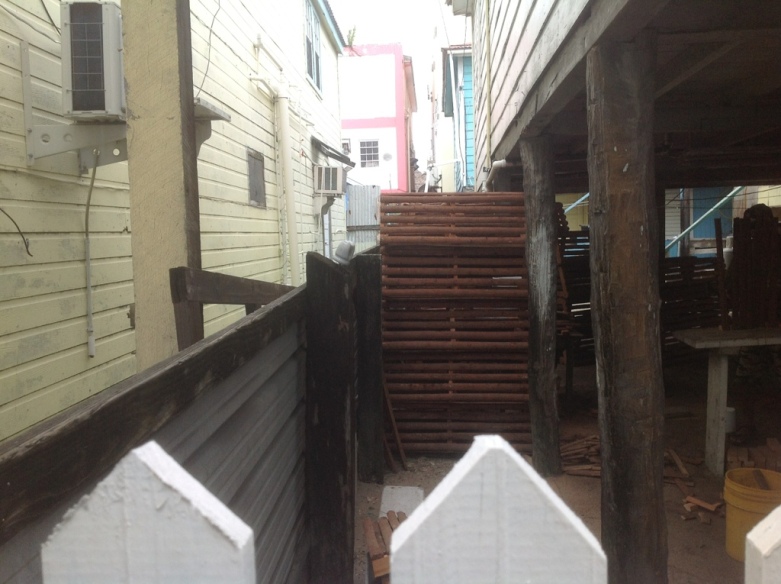 Funny how you can walk by something so many, many times and never notice it. Today I did. Must have been the second cup of coffee.

Got home and Rose and I finished off some bits and pieces and then I went to Tropic Air to pick our friends up. A quick tour of the condo for them and we (just Rose and I – well it was our anniversary) headed off to our build in Ambergris Caye,Belize. On the way there we stopped off to buy twenty-two bottles of soft drinks ( nineteen for the guys on site (I ‘phoned Anhill before going in to the shop), one for Daniel (in case he was there) and one each for Rose and I).

On arrival Rose handed out the drinks and we then headed to the scaffolding to make the climb up. Rose got a couple of feet up the scaffold and then said she could go no further and that I should go up without her. I remonstrated but to no avail so (as I always do!) did as I told. Zapeda seeing this got a couple of the guys to put more boards on the scaffold frame to create the semblance of a ladder for Rose and with a little coaxing Rose was up on the roof. 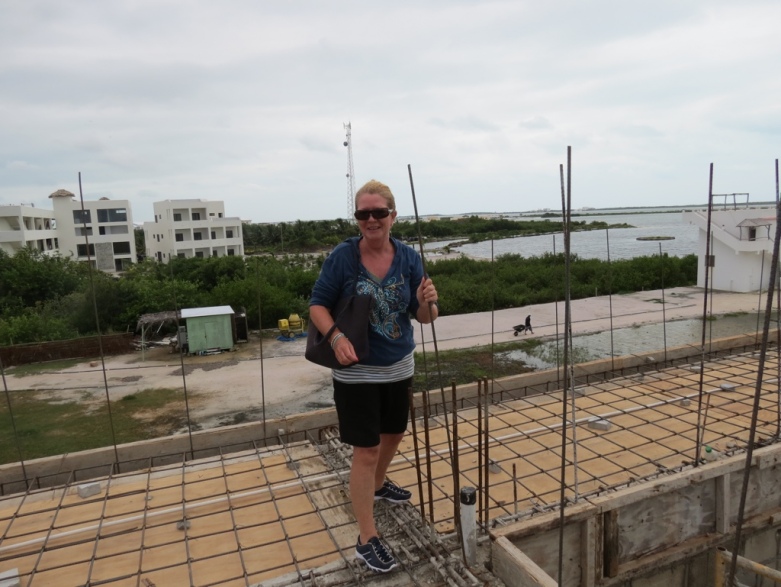 A rebar rod to the rescue.

Whilst Rose gripped the rebar I wandered around taking a few photos of the guys busily putting the pipe work in place and finishing off fixing the rebar in position. 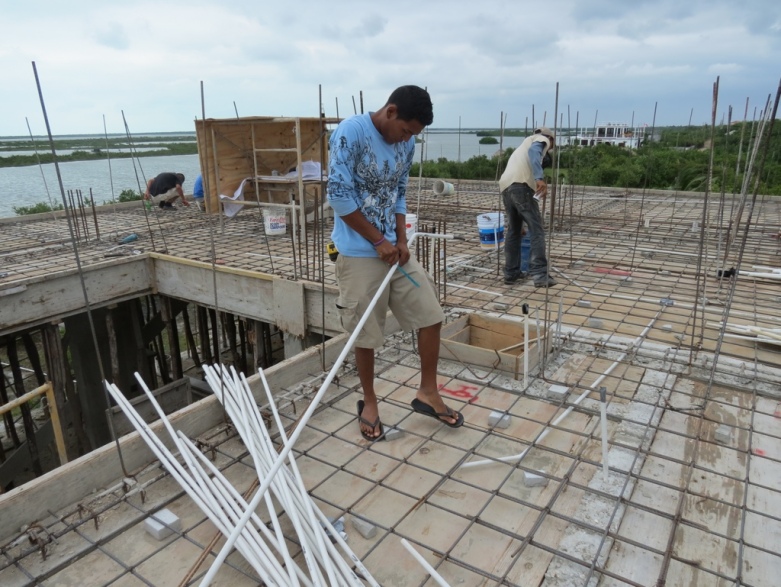 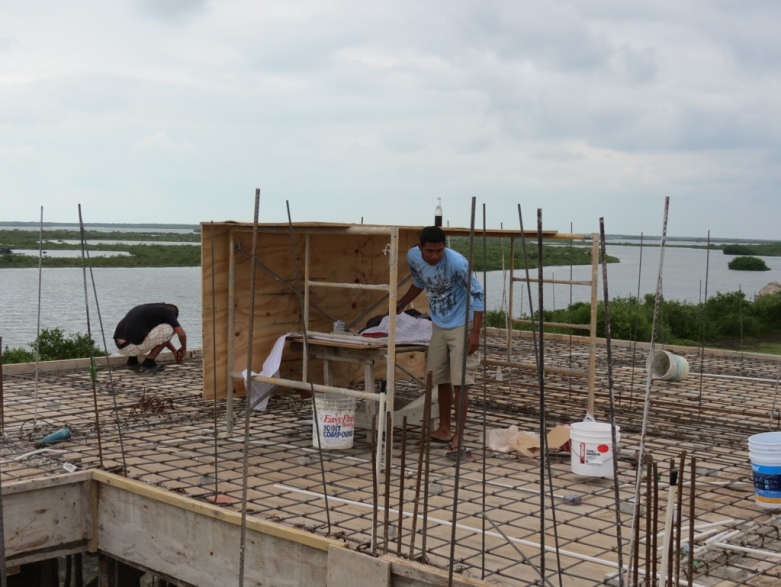 Checking where it needs to go. 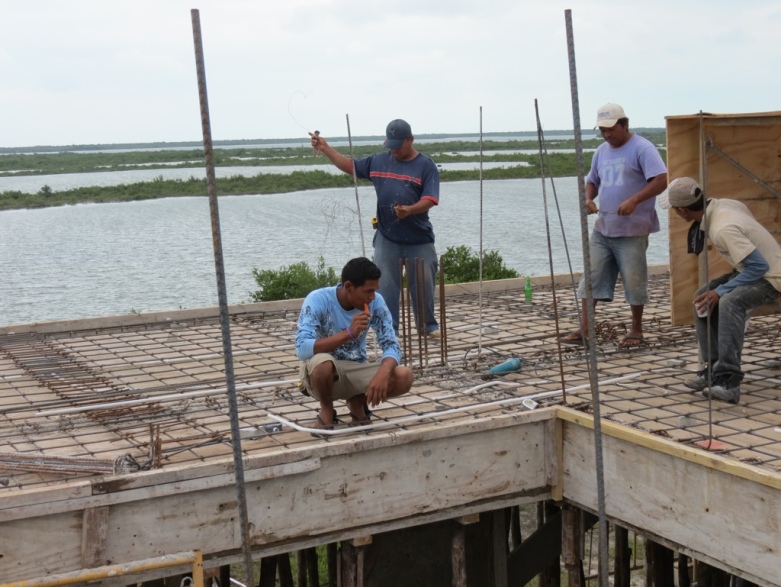 “Still not sure about this”. 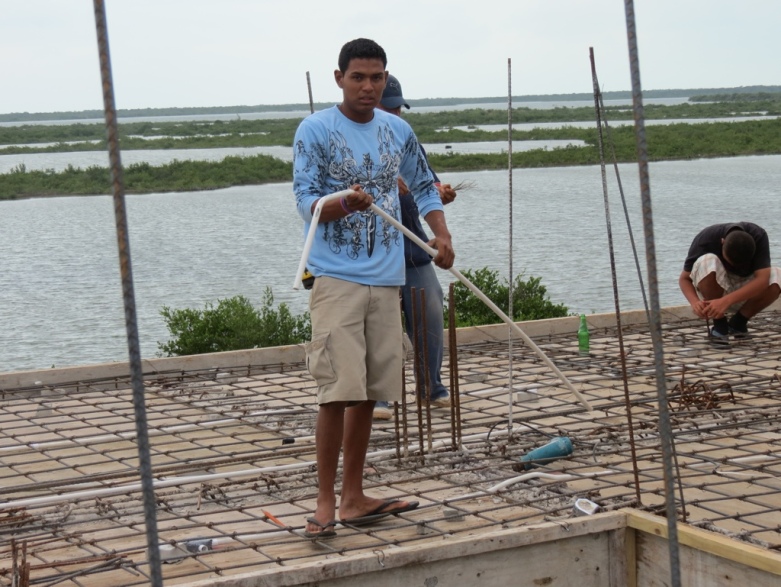 Just behind Nicholas were Sam and Edson putting the final lengths of rebar in place. 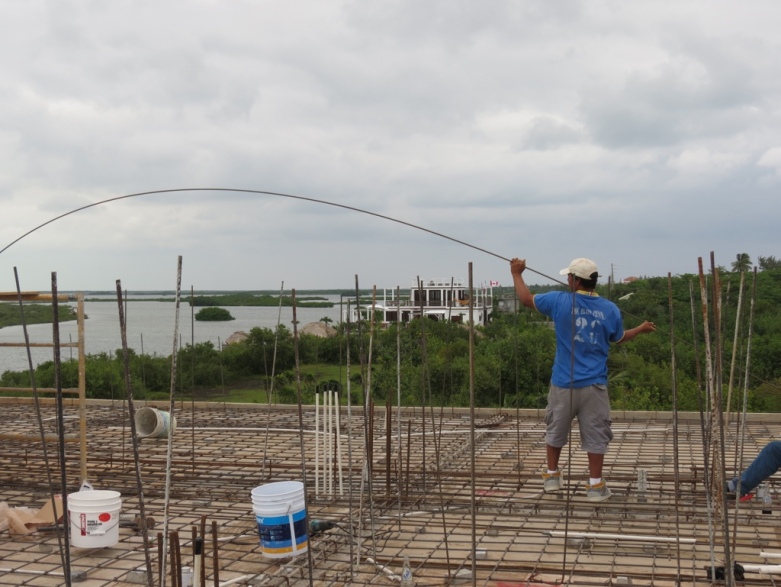 All around us the guys were fitting the pipe work because it needed to be finished today for the concrete pour to take place on Saturday. 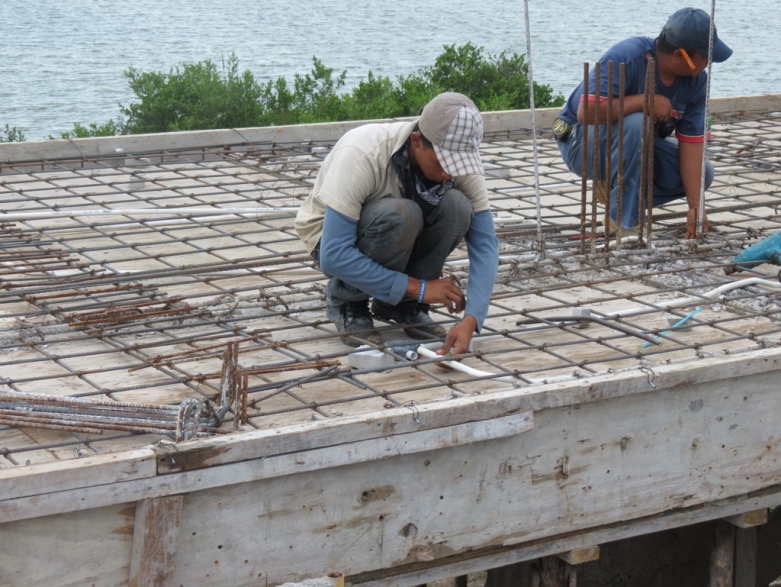 While we were up there the guys took a quick break. 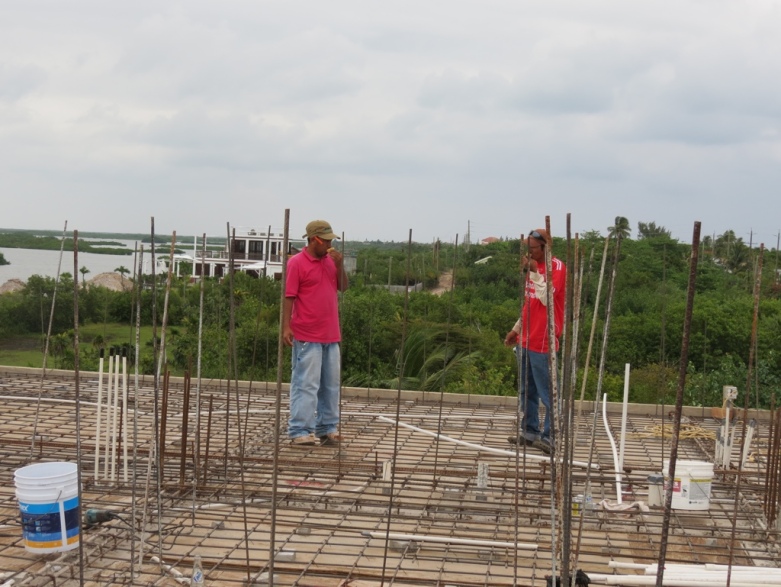 A refreshing orange. In England it probably would have been a meat pie (or two)!

During our time up on the roof trucks were delivering sand and stones for the concrete pour. 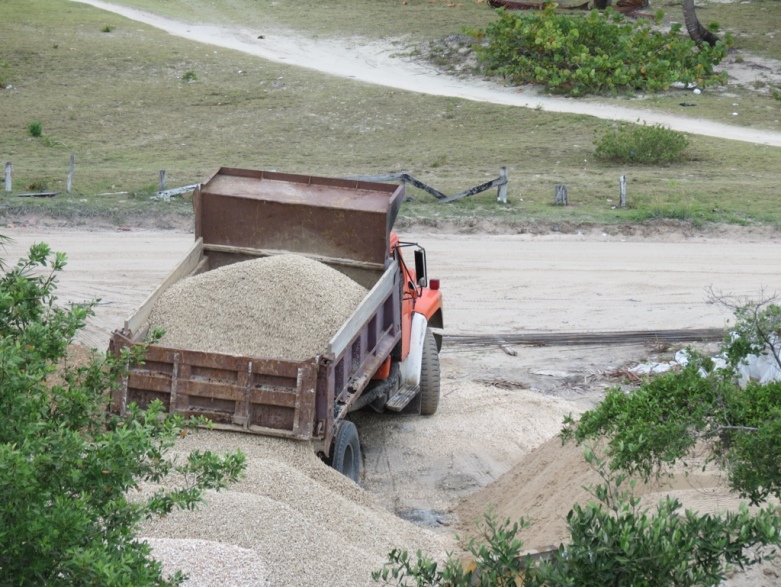 Delivery of stones being tipped. 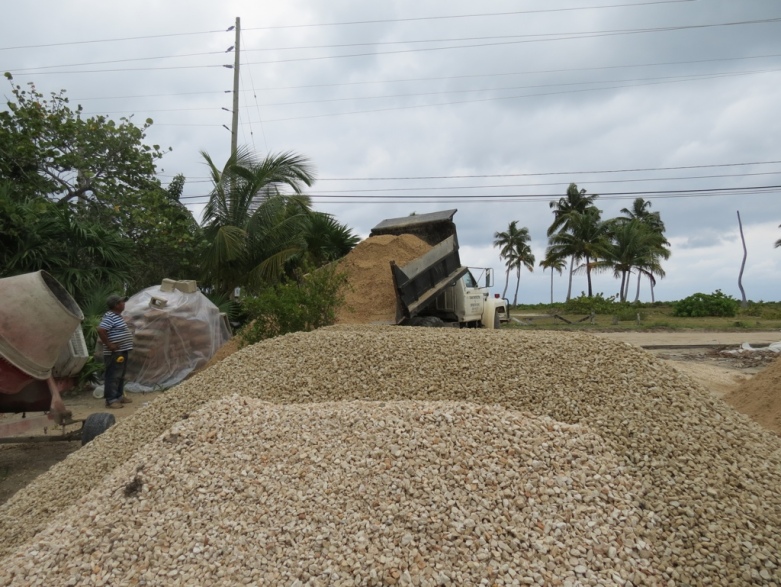 Quickly followed by a load of sand.

Not wishing to distract the guys any more and put the concrete pour at risk Rose and I left the roof. Rose made it down a lot easier, and a lot quicker, than the way up.

Read Sunday’s edition to find out how the pour went. Will Rose make it up the scaffold for it?

The headline is based on the song by The Drifters which was released towards the end of 1962. Early the following year it reached number five in the US Billboard Hot 100.