I don’t know what it is about a concrete pour for our build in Ambergris Caye, Belize but the advent of one most definitely increases my excitement levels. And this was decidedly the case this morning when I woke up much earlier than usual at 3.30 am.

On finding out the time I tried very hard to return to sleep. Counted sheep. Counted the number of goal scoring chances that Arsenal have spurned in recent games. Turned to a more pleasant subject and tried to count the number of concrete blocks used for our house so far. Nothing worked. In fact I became more awake and so gave it up as a bad job and got up.

After a couple of mugs of coffee on the veranda it was time for a shave and shower, on with the shorts and T shirt, grab the camera, kiss Rose goodbye, and I was on the road again to head to our build in Ambergris Caye, Belize.

Got there at 6.25 am and it was eerily quiet. No sound of voices. No sound of the concrete mixer. A quick look at the bodega to see that it was still locked and that there were none of the guys’ bikes around informed me that I was too early. Not wishing to be there when they ‘clocked in’ at 7 am I was forced to go for breakfast again at Estel’s (OK I could have just hung around but…).

Watching the sun come up whilst having breakfast.

Got served quickly (only three other customers there) and was back at our build in Ambergris Caye, Belize at 7.30 am to pleasingly see that it was ‘all go’. No ‘mixer going yet but it was obvious the way things were laid out that it wouldn’t be long before it was. 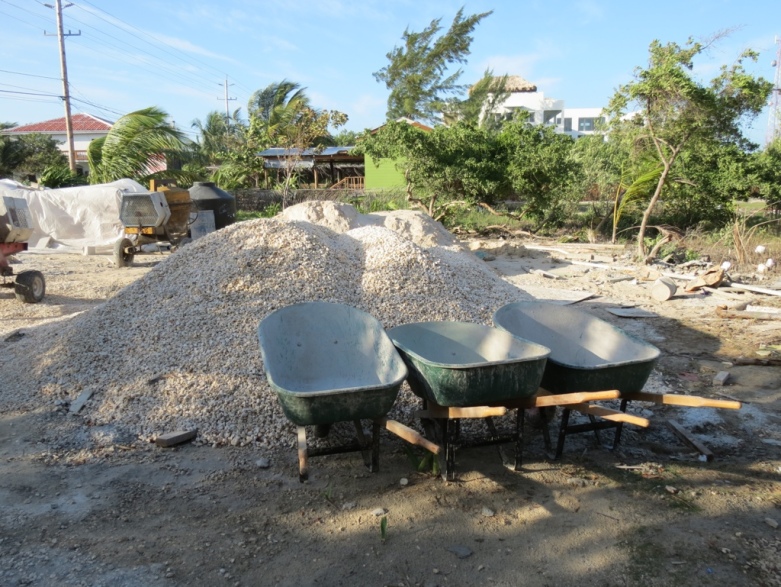 A walk down the path from the bodega and I could see a hive of activity with guys setting up the platforms on the scaffold while others were finishing off the form work. 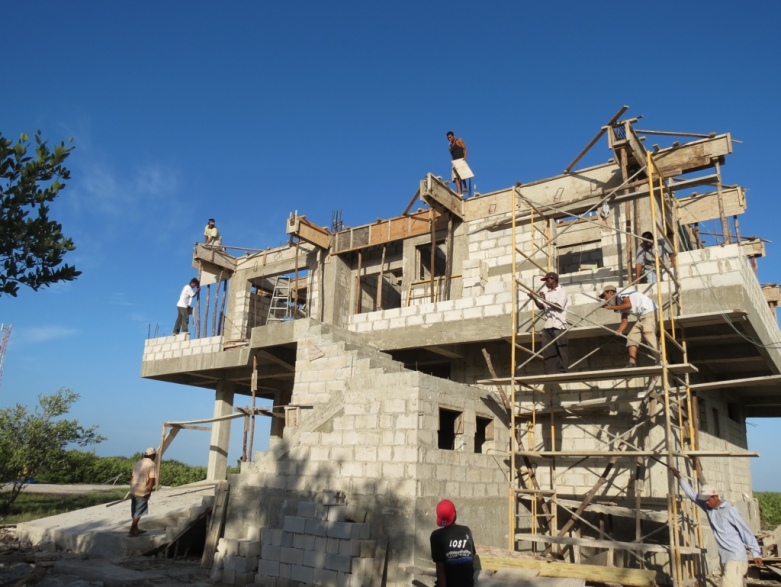 Nicholas measuring the board for the front of the form.

I hadn’t been there too long when the food cart arrived and the guys rushed to get food and drinks and found their
dining areas around the site. When they started the concrete pour there would be no stopping for breaks.

A group of the guys in the shade under the trees near the bodega.

Within twenty minutes they were back hard at work finishing the forms. 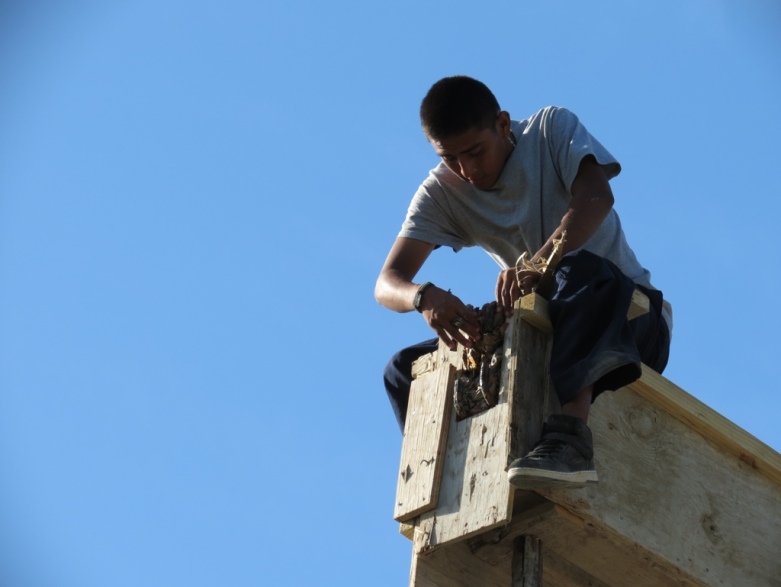 Probably the youngest member of the team (his Dad was a member too) stuffing the end of the form with a wet cement bag to stop the concrete pouring out.

With the forms finished by 8.45 am the final preparations for the pour were underway.

Filling the water chiller up.

And the guys that would be on bucket duty assembled near the scaffolding. 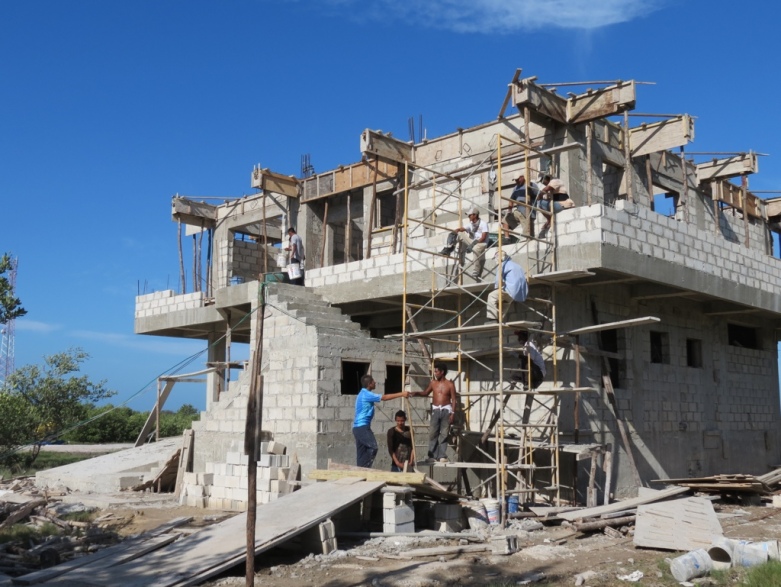 Time to ‘feed’ the concrete mixer.

Nicholas and Sam on bucket duty with the shingle and sand.

And Wayne with the cement.

On yer head, as they say in England.

It wasn’t long before the wheelbarrows were delivering the concrete to the base of the scaffolding for pouring into buckets. 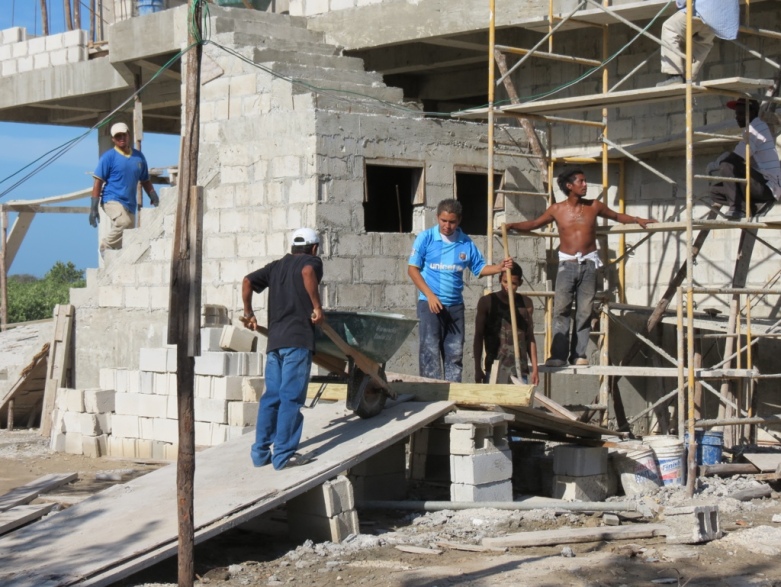 Loaded into the wheelbarrow.

Delivered to the pouring point and lifted to the guy on pouring duty. Zapeda on lifting duty.

And Rafael with the pour.

With the pour underway I went home to watch the second half of the Arsenal versus Aston Villa game (see what our build in Ambergris Caye, Belize means to me – I missed the first half!). Arsenal won.

Rose and I returned to the site at around 12.30 pm to watch the final stages of the build and the guys were still hard at it at the front of the house. 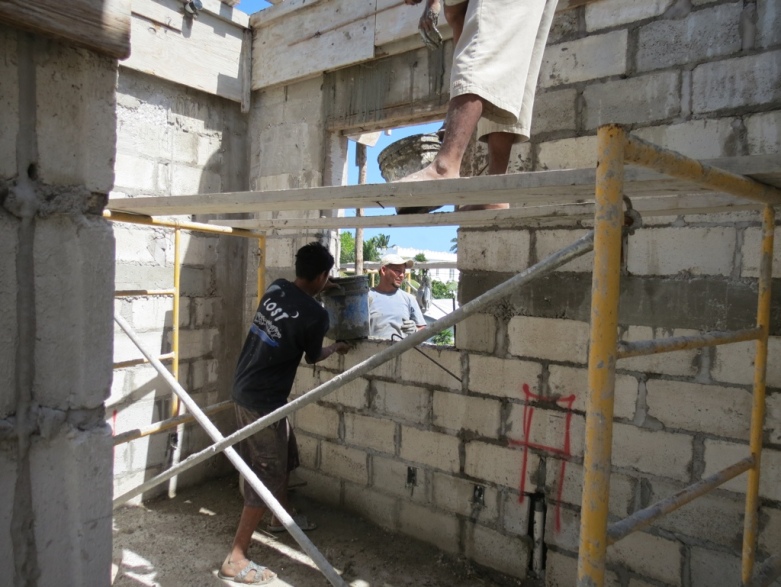 Through the utility room window.

The guys finished the pour at 2 pm, just over 5 hours after they started and they were all looking forward to the start of their weekend . They get Sunday off!

Next week the guys will fit the forms and rebar as the forerunner to the pour for the slab that will form the ceiling for the First Floor and the floor of the Second Floor.

I have it from a reliable source that the Mystery Blogger saw Canned Heat perform at Hyde Park and also saw Willie Nelson at the Hammersmith Palais.