Spent the early (from 5.15 am) part of the morning as I do most days on the veranda with a cup of coffee and my iPad catching up on the news via my subscription to The Times. That done I then switched to looking at the blogs that I read. Started off with Bebelize and then moved on to Tacogirl. It’s good to know what other bloggers are writing about/covering. To finish off my local news intake I visited the Ambergris Caye message board.

Fully blogged-up I then moved on to researching hotels in San Antonio for the up-coming trip that Rose and I going to make to Texas. Only now need to draw up the short-list (we will book the accommodation when we get there) for San Antonio and Austin and we are ‘good to go’.

Only a couple of chores for me today and got the first one – advising the credit card customer service people of our impending trip to Dallas- out of the way fairly quickly. Don’t want them putting a ‘hold’ on my cards when I need them the most!

The second one was even easier ( I like these kind of chores). Just had to put some gas (have given up calling it petrol because too many people look at me strangely) in the golf cart. With a BZ$50 spend (@BZ$11.43 a gallon pump price) I got just over 4 gallons. That should last a few weeks even with the daily trip to our build in Ambergris Caye,Belize.

With the chores done Rose and I then assembled the stuff we needed for our 5 pm meeting with Daniel Camal, our building contractor and then drove to our build in Ambergris Caye, Belize and arrived there around 2.30 pm.

Disappointingly there was no sound of the concrete mixer in action. Pleasingly though we could hear the sound of hammers and from afar we could see somebody at ground level knocking support poles out. 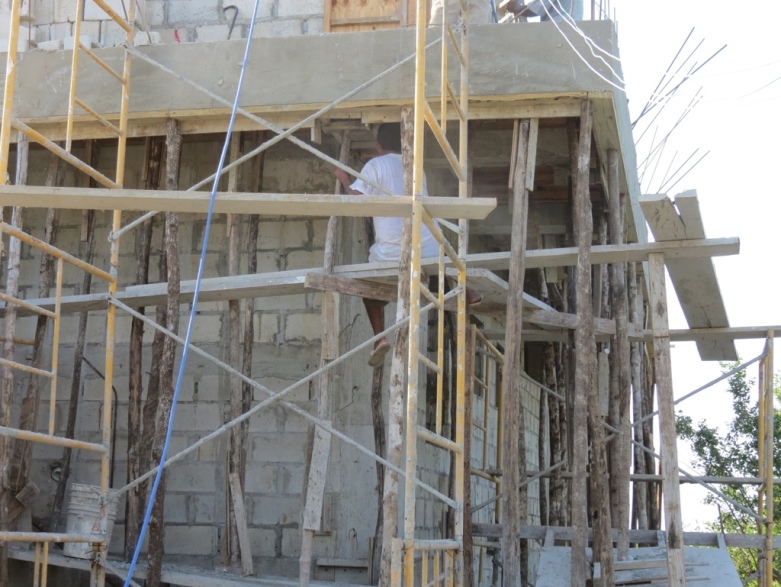 One more hit should do it. 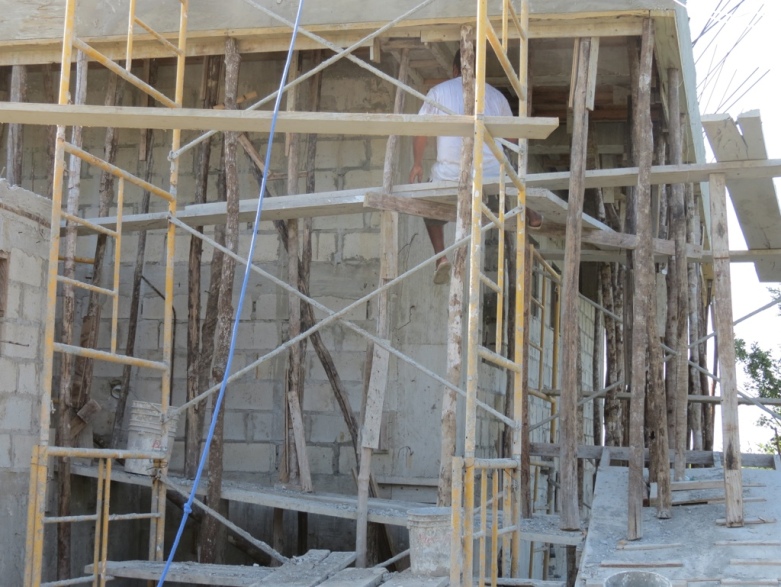 Just above him we could see Anhill,Porfelio and Martin in the process of removing a form board from he north-east corner of the house. 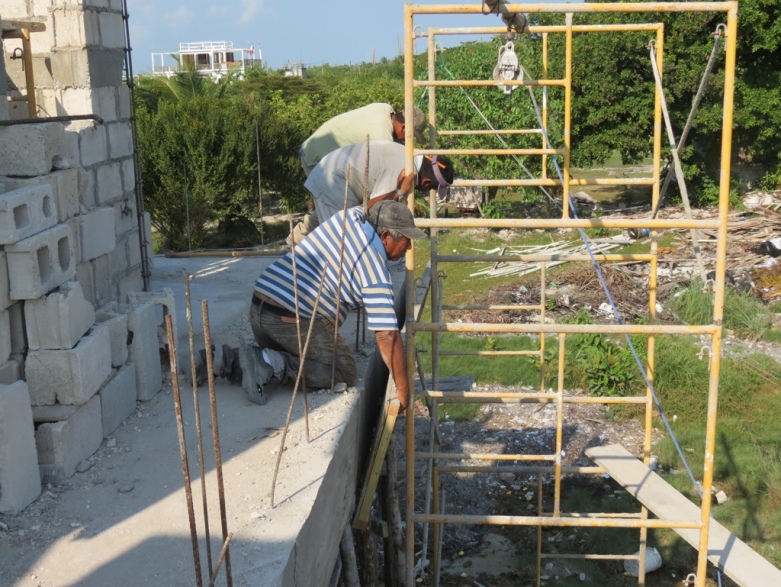 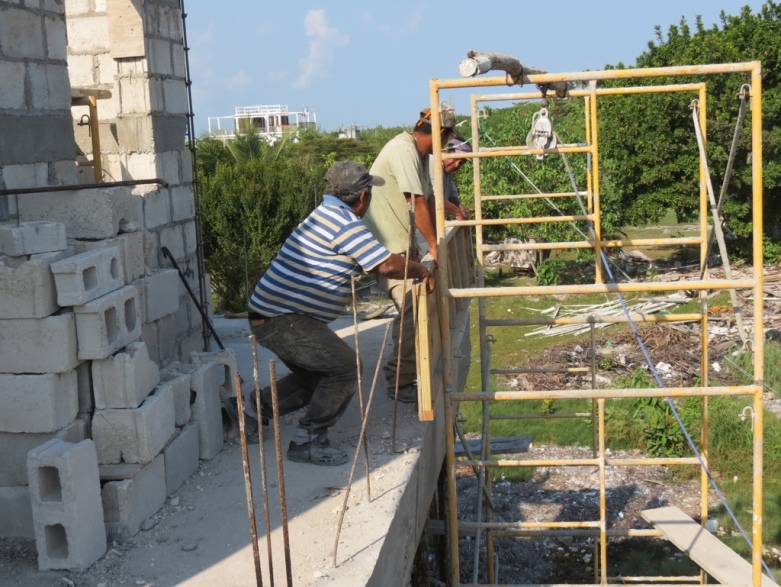 Within minutes they were placing he board on the First Floor to be used again. 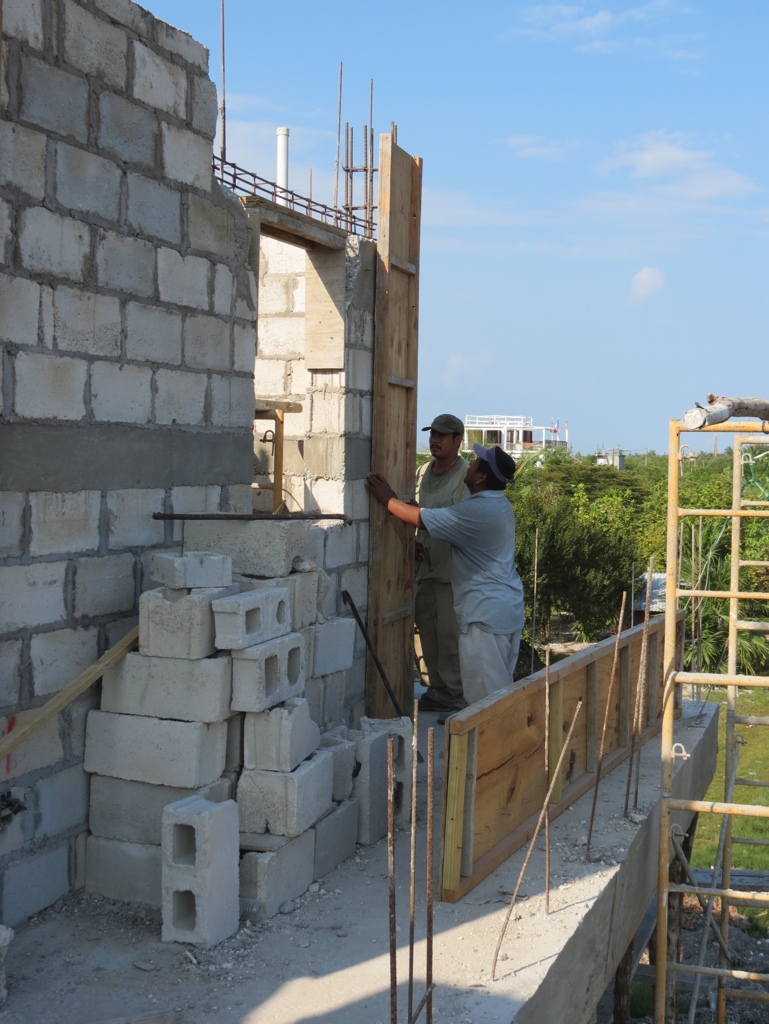 Just a bit to your left Anhill.

And in no time at all the hammer was out and the nails were going in. 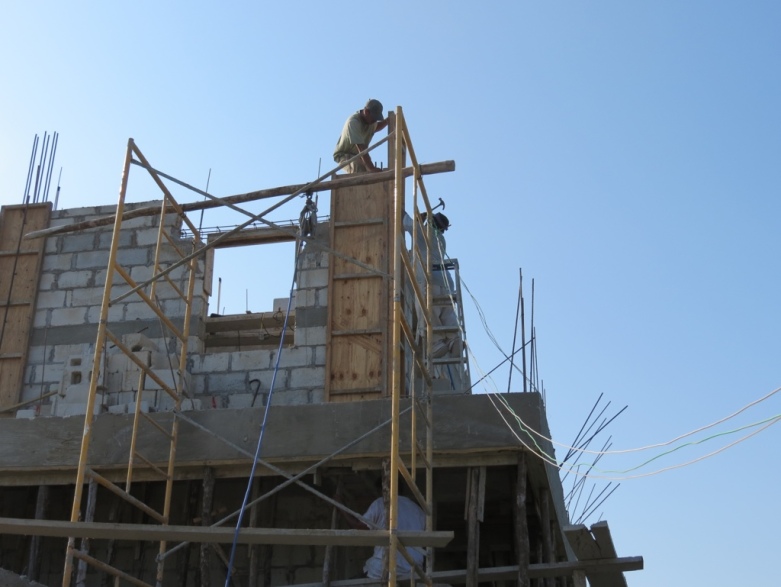 Anhill holds the board in position while Martin hammers in the nails.

It was fairly obvious that this was a day for the small but nonetheless essential jobs. A day of bits and pieces.

A walk around the First Floor of our build in Ambergris Caye, Belize and we could see that two of the younger members of the team were busy at work sweeping and generally clearing the floor of rubbish and debris. 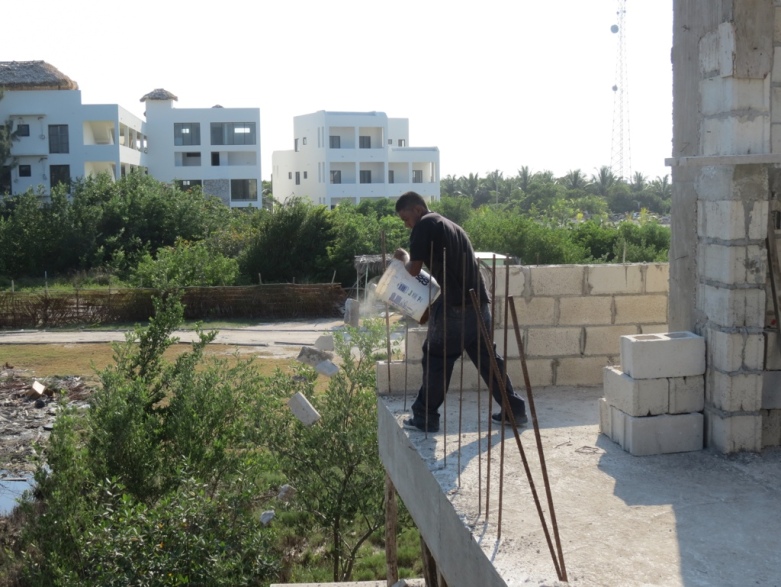 Emptying a bucket at the front of the First Floor. 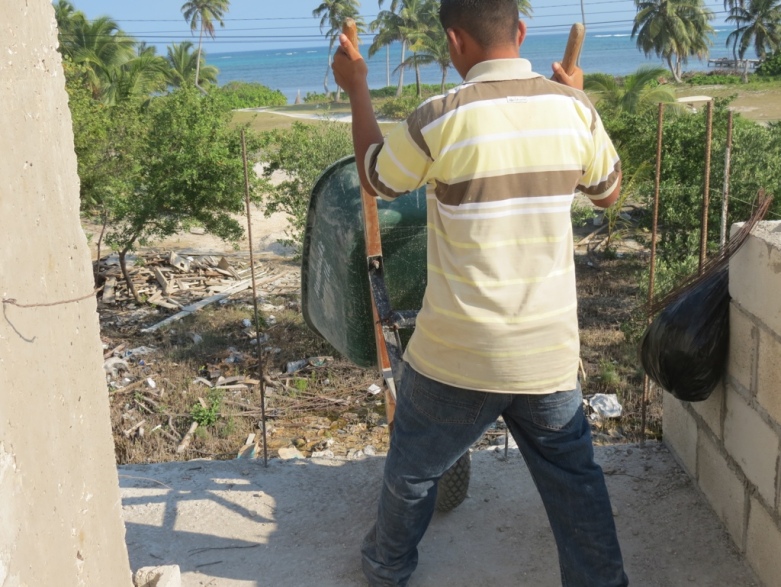 No bucket for me, I can get so much more in a wheelbarrow.

The rubbish being cleared will help with the landfill that is necessary for much of our land. 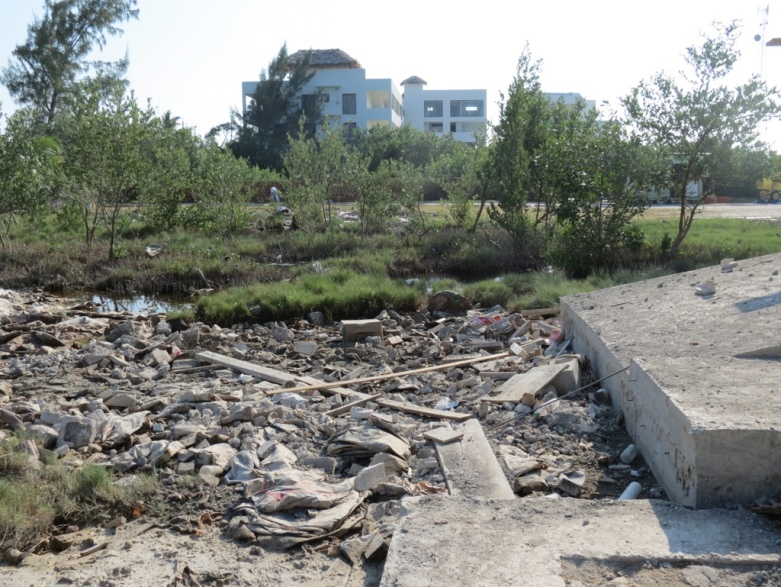 Land starting to rise around the golf cart ramp.

A walk to the western (lagoon) side of the house revealed that a start had been made on putting the rebar in place for the Second Floor veranda. 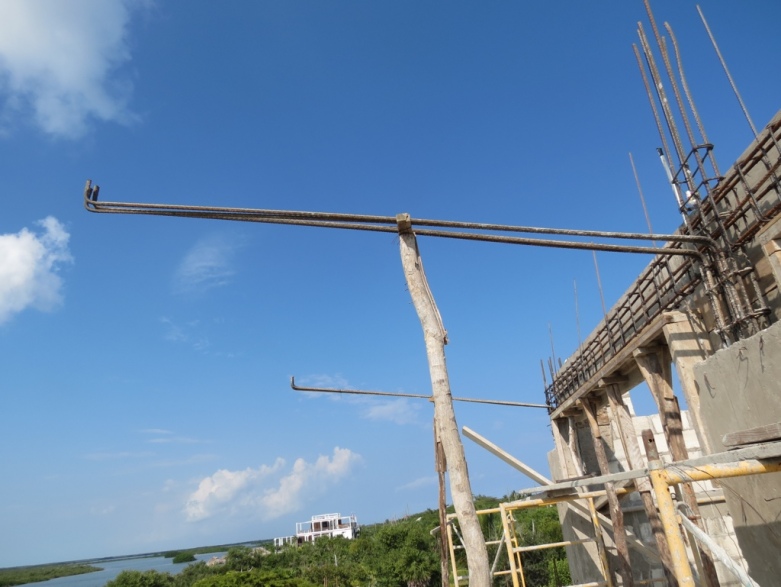 Lots more to do yet but… 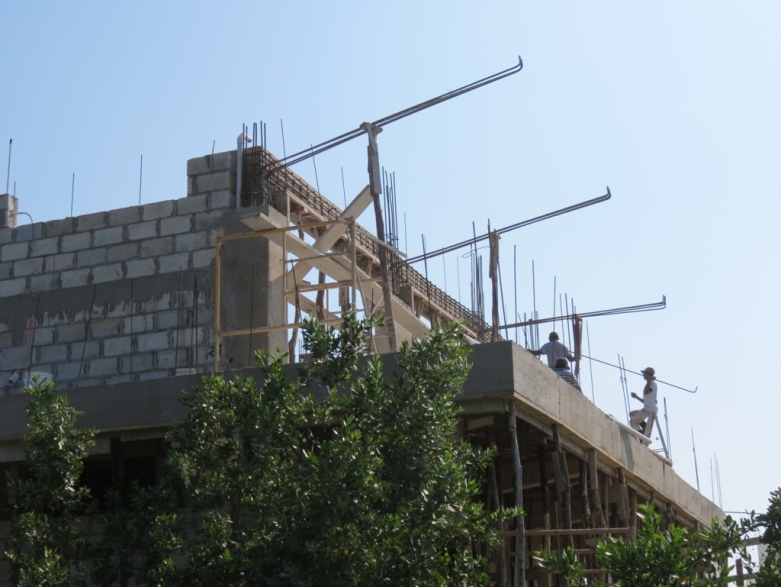 But it is looking good. 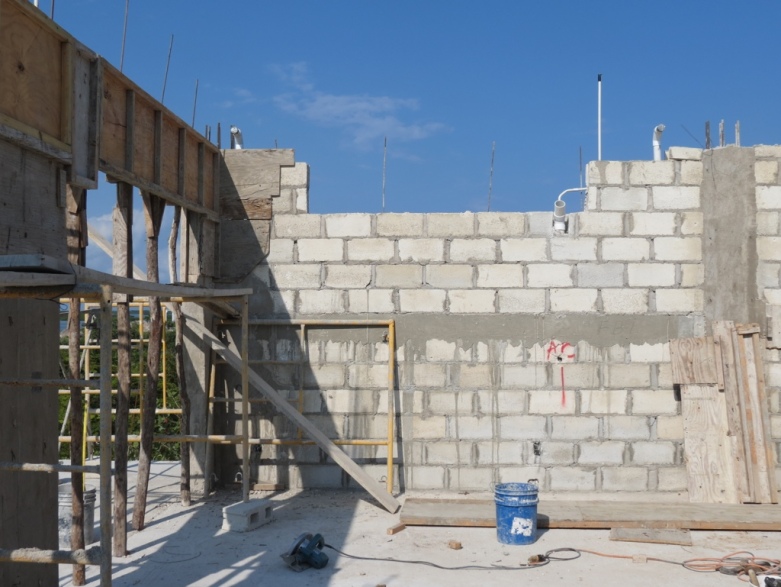 The headline is based on the 1964 single by The Dave Clark Five which reached number two in the UK Singles Chart and number four in the US Billboard Hot 100.