Spent a little time this morning typing the ‘agenda’ for our meeting on Friday afternoon with Daniel Camal, the contractor for our build in Ambergris Caye, Belize.

We believe that we have a far more productive and less time consuming session if we send him outline detail for the things we want to discuss with him in advance of our meeting. This way if there is a need for preparatory work on his part he has time to take care of it.

The ‘agenda’ also forms the basis for an ‘agreed action points’ email from us following our meeting. Maybe a little formal for some but this approach helps us to document everything and -we hope- should result in no,or much reduced, misunderstandings between Daniel and us.

When you are involved in a costly project like building your next (and we think maybe our last) home one thing is for sure, you don’t want to be misunderstood.

After drafting the ‘agenda’ for Rose and I to go through later to amend as necessary I thought I deserved a treat and went to Estel’s for breakfast (I only need a flimsy excuse). Because I am generally a person of set ways it’s got so I don’t even have to order when I go there now. It just appears!

When I finished I drove to Fire Coral Street to see how work on clearing our third lot was going . Still some way to go but they have made a good start. 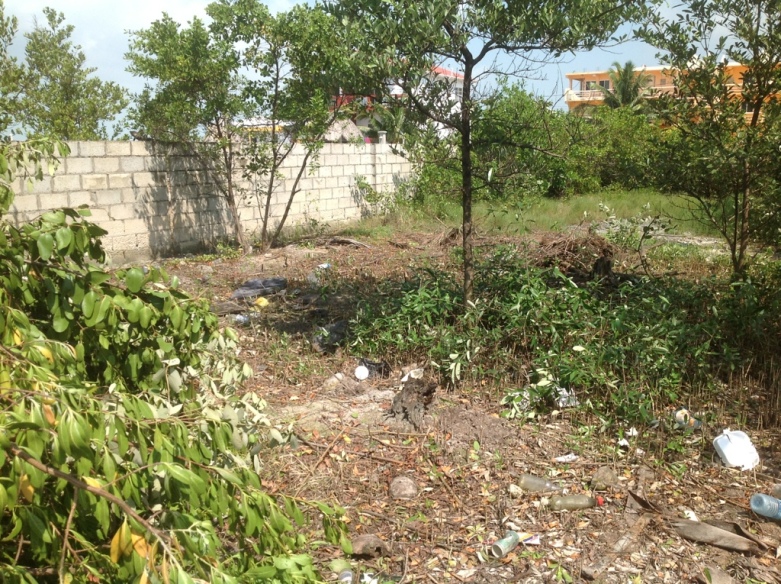 The area near the canal is the area remaining to be cleared.

What has been cleared so far. Just needs to be disposed of now.

And the ‘obligatory’ household rubbish bag has been dumped.

I then went home to take care of some household chores until around 3 pm when it was time for Rose and I to make the trip to our build in Ambergris Caye, Belize.

When we got there I could see that the recent warm and rainless weather had dried out the area in front of the house and so much so that for the first time I was able to take a photo of the front from relatively close.

Must learn to hold the camera straight – the house doesn’t slope the way it appears in the picture. Honest.

When we got up the stairs we could see that many of the forms that were poured with concrete yesterday had been removed. 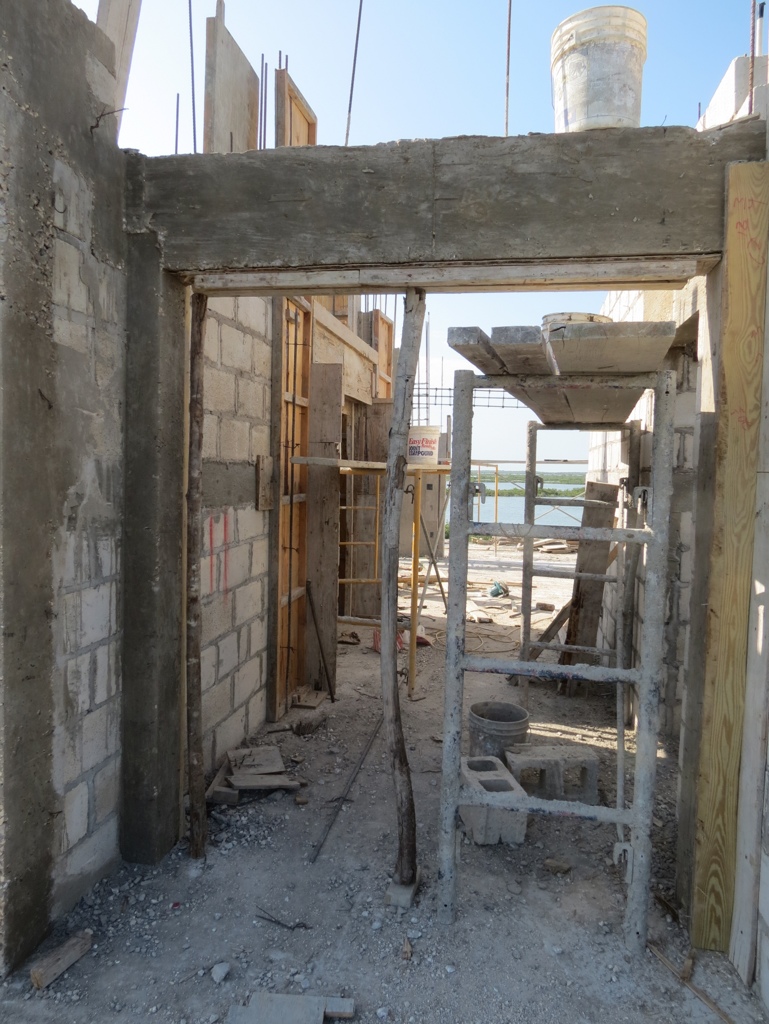 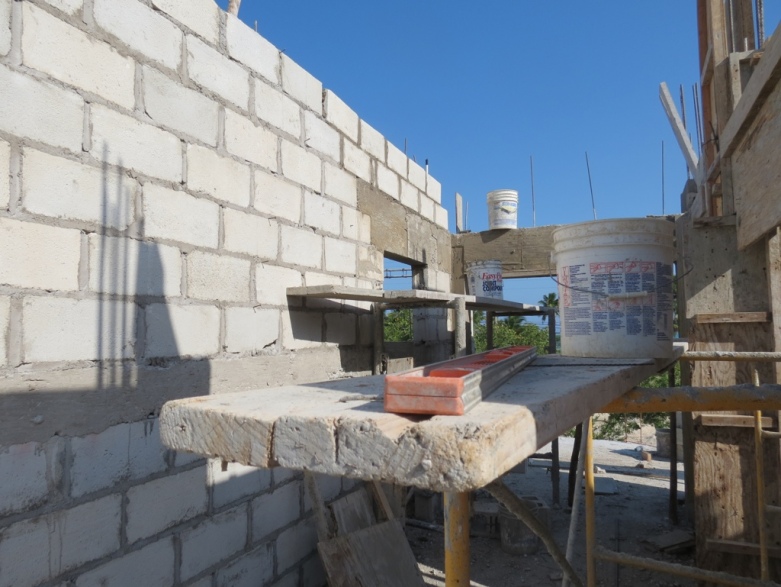 Beam/lintel above powder room (looking down the hallway from the living/dining room area). 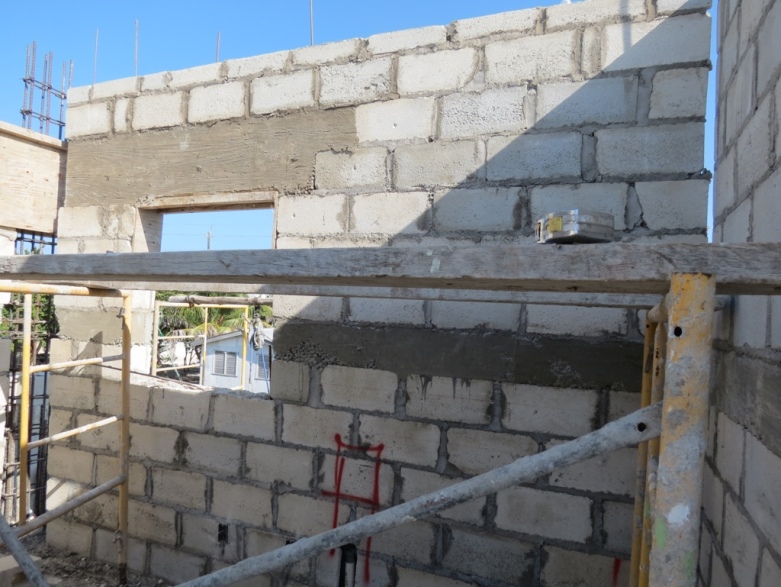 One of the two lintels in the Utility room in place.

Rose has her handicraft room and she has very generously (sic) told me that I can have the Utility room. So when I was in there today I thought I would see what views I will have when I am eventually able to spend ‘quality’ time in there.

The view from the north facing window. 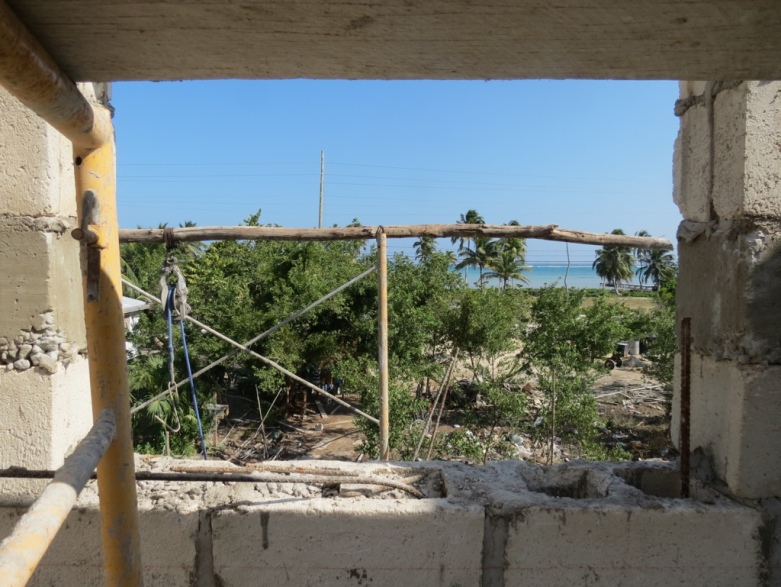 View from the east facing window.

During our visit they were finishing off work on the forms in the hallway/Rose’s handicraft room in readiness to make the pour. For those easily upset by the sight of rebar now is the time to go and make the coffee!

If you look hard you can just see the ‘mixer between the trees.

And it was time to start the pour.

Now that’s the way to pass the buck(et).

On the other side of the house Rafael was pouring concrete into the form above the northern window in the Utility room.

Believe me that is Rafael behind the bucket.

Before we left we could see that they had also removed the forms from the columns on the western (lagoon) side of the house where the sliding glass doors will eventually go.

Exposed column under the rebar frame for the Second Floor supporting beam.

As a Valentine’s Day treat (told you Rose was in a generous mood) she showed me the view I will get from the window near the kitchen sink ( apparently I am going to get virtually exclusive use of this area). 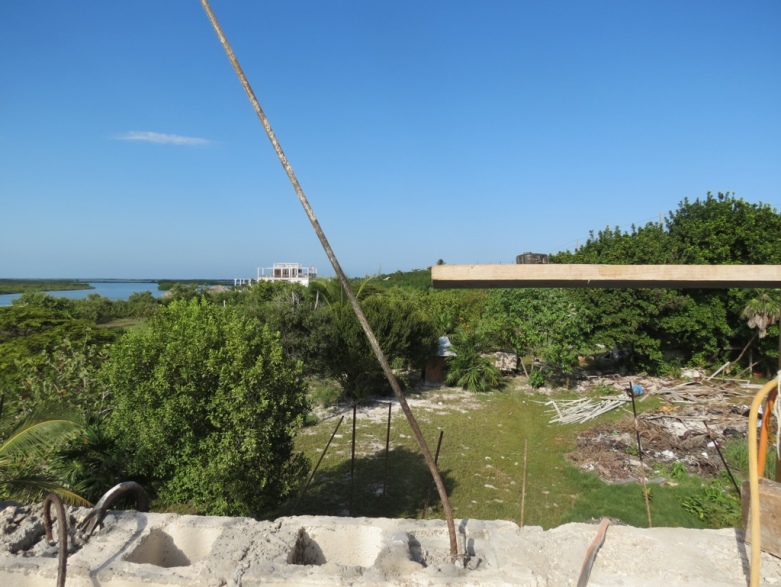 On the way home we stopped for a beer (OK two) at BC’s and I managed to catch a photo of a boat going by.

There’s no reason for its inclusion in this edition apart from the fact that I like it.

The headline is based on the song first recorded by Nina Simone in 1964 but which gained prominence when it was released in 1965 by The Animals. It reached number three in the UK Singles Chart and number fifteen in the US Billboard Hot 100.