Having witnessed the progress that has been made on our build in Ambergris Caye, Belize during the last few days it is extremely difficult to keep our expectations under control. Not to expect too much. Keep our feet on the ground. Rome wasn’t built in a day, not to run before we can walk, etc. Well we are trying and trying hard. But it is difficult, bloody difficult.

We have to remember that progress was stunted recently by the heavy downpours. There is still a long way to go and there could be another hiatus or two before the house is complete and we can move in to our new home in Ambergris Caye, Belize. We are quietly confident, however, that Daniel Camal, our building contractor, will finish ahead of the scheduled forty week completion date of 11 August. We feel this because every day we visit it’s getting better all the time.

But not wishing to be like the idiom ‘counting your chickens …’ we have extended the lease of the condo we are renting with the understanding that we can extend again if we need to.

Anyway enough of the idioms, proverbs and my musings and on with the reason why the vast majority of you bother to use your valuable time visiting this blog – our build in Ambergris Caye, Belize.

When we got to the site we could see before we had even parked the golf cart that they had made great progress on fitting the forms for the next concrete pour to create the beams for the walls of the First Floor. 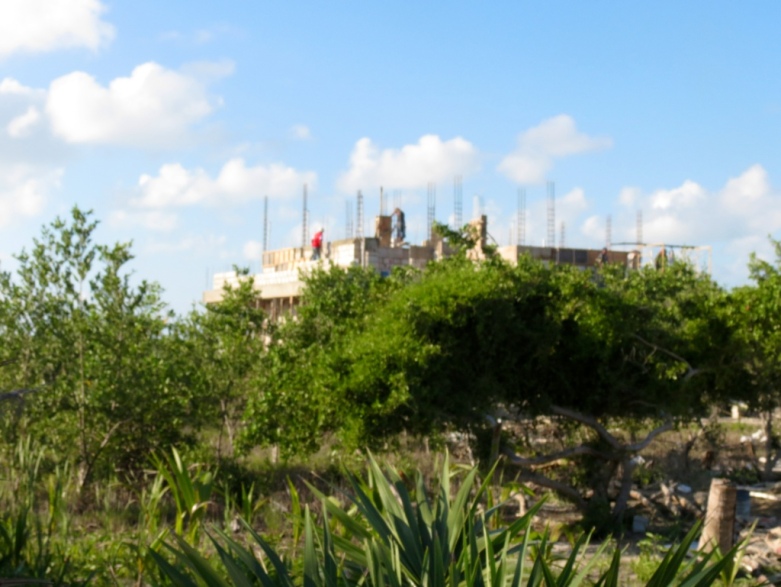 Front of house from the south-east corner of our land.

As we parked up we could hear the ‘mixer going again. Always a great sound to hear. We very quickly – with the benefit of stairs now- got up to the First Floor and it was abuzz. Guys everywhere. All seventeen of them. I didn’t have to count them because it became obvious when Rose and I handed out the soft drinks we had bought for them. All sixteen of them. Not good, so we now have Anhill’s ‘phone number so that we can call him to find out how many guys are working before buying drinks the next time.

They had made a good start on the forms but there was still more to fit.

Nearly in place on the dining area wall.

Precariously balanced whilst drilling a hole for a rebar rod. 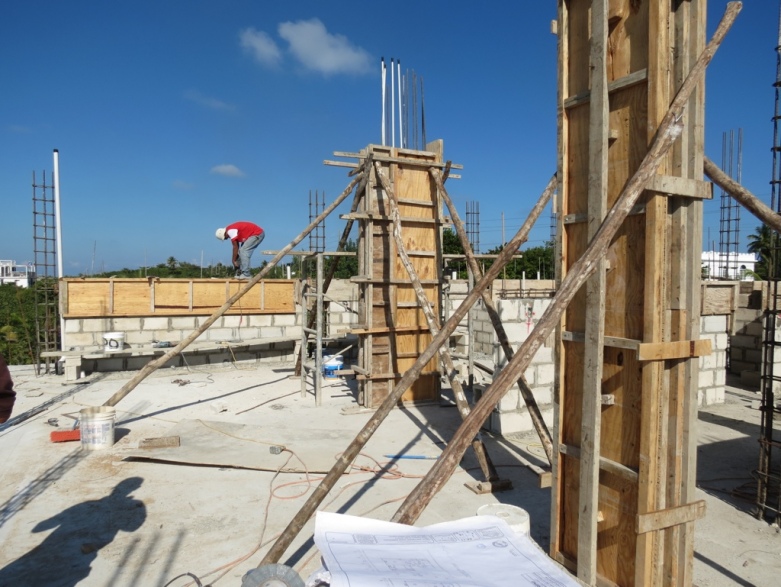 Forms in place for the pillars in the living/dining area.

Fitting the final form in the hallway.

Forms in place in the Utility room.

After Rose and I left our build in Ambergris Caye, Belize yesterday afternoon they had poured concrete in to some of the forms on the southern side of the house and with the forms removed we could see that they were curing nicely.

Forms still in place but drying nicely on the eastern exterior wall.

Whilst we were there good progress was being made on laying the ‘blocks for the southern veranda wall.

Horizontal poles will be fitted at a later stage.

Work was also taking place pouring concrete in to the forms to create the pillars in the living/dining area.

Pass me another bucket.

We also saw the neat way in which they fit the electric boxes in to the forms so that after the concrete has cured the boxes are in place.

We are really pleased with the way things are going but for the next five days we can also enjoy the San Pedro Carnival. Really looking forward to it.

The headline is based on the song by The Beatles which was track four, side two of ‘Sgt Pepper’s Lonely Hearts Club Band’. The album was released in 1967 and was number one in the UK Album Chart for twenty-seven weeks and enjoyed fifteen weeks at the top of the US Billboard 200.