It was quite chilly on the veranda this morning when I took my early (around 4.30 am) coffee. We started to feel the drop in temperature yesterday evening when a cold front moved in and it was still there this morning. Actually had to put a ‘T’ shirt on and probably could have put a sweat top on too like many of the people taking their early morning walk. It got colder as the day progressed but compared to where we come from (UK), especially at the moment, it is still lovely and warm.

On the drive up north to our build in Ambergris Caye, Belize in the afternoon we could really feel the chill factor in the wind, especially with no windshield on our golf cart, and I regretted not putting on the sweat top that Rose recommended. When will I learn that – as she tells me – she is always right ?

As we approached the site there was no trace of the sound of a concrete mixer, just the sound of hammers hitting nails. After parking the ‘cart and walking towards our build in Ambergris Caye, Belize we could see why. The Ground Floor golf cart parking area looked like a forest. A bit of literary license but there were a lot of horizontal wooden poles in sight. Poles that will support the form boards for the concrete beams that will be first stage of the First Floor.

The sight before us, a maze of wooden poles.

After walking up the stairs – what a pleasure it is to access the Ground Floor this way as opposed to the wooden ramp – we could see how the poles were held in place.

Each acrow is cut specifically for the requirement and some of the poles and plywood (and a fair few nails as well) will have been used three or four times already.

Nothing elaborate but they are effective.

Similar activity was taking place across the whole floor and it was difficult, if not nigh on impossible, for us to access the rooms without interrupting the work. So we didn’t try. Time is money after all.

Instead we concentrated our inspection on the exterior of our build in Ambergris Caye, Belize and when we did we saw that more of the window lintels had been poured.

All lintels in place on the western (lagoon) side of the house.

Also done on the northern side of the house.

Scaffolding and acrows were being fixed to support the form boards for the concrete pour that will create the veranda on the western (lagoon) side of the house.

It continues to amaze me how the guys put themselves into working positions that would not be allowed – because of Health and Safety rules- in the UK. 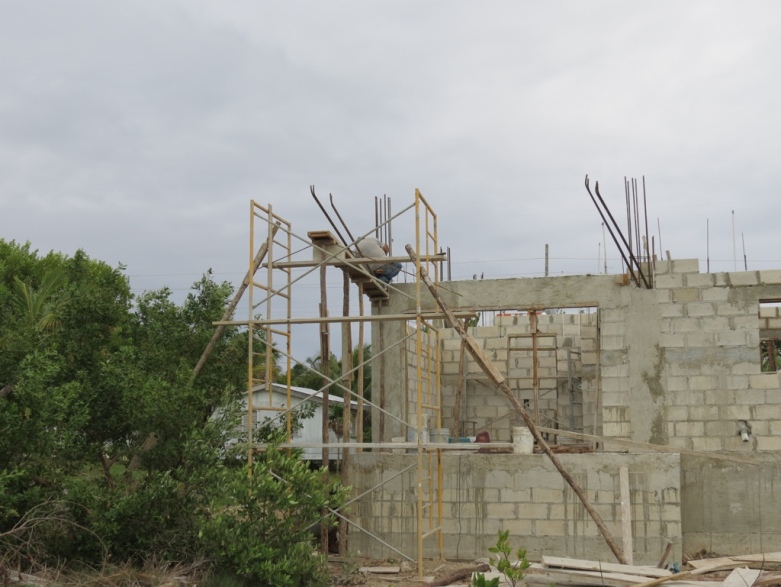 Precariously balanced whilst fixing the rebar into place.

How about this for one of the supports for a form board.

And what about the made-on-site ladder.

Similar activity was taking place on the eastern (roadside) side of the house to put the form boards in place for the veranda (this one will have a depth of five feet).

Working in between the bedroom, the pump room and the staircase.

So essentially a day for the carpentry skills of the guys.

The headline is based on the song co-written and initially sung by Eddie Floyd but which gained its greatest success when recorded and released as a single in 1979 by Amii Stewart. It reached number one in the US Billboard Hot 100 and number six in the UK Singles Chart.