First of all sincere apologies for the technical problems that prevented the inclusion of photos in yesterday’s edition. Pleased to ‘say’ that normal service resumes today. Hopefully the techie gremlins will not return.

Spent much of the morning catching up with news (especially the atrocious weather conditions) from the UK via my subscription to The Times, researching on the Internet for fittings (door handles and lights) for our build in Ambergris Caye, Belize and taking the golf cart for its service ( with the daily/bi-daily trips to the site I wanted to make sure that it is OK for oil and that the brakes are in good working order).Given the state of the roads north of the bridge I also asked them to take a look at the suspension. All in all a rather leisurely morning.

In between I managed to squeeze in ( prior to taking the cart in for it’s service) a breakfast at Estel’s ( should get a free one for all of the plugs I am giving).

Time flew by and in what seemed like no time at all it was time for lunch and given the earlier hearty breakfast I had just a couple of sandwiches and a cup of coffee. Fully fed it was time to head off to our build in Ambergris Caye, Belize.

No change as we drew close. The sound of the concrete mixer greeted us and as we walked towards the house we could see some of the guys in the distance. 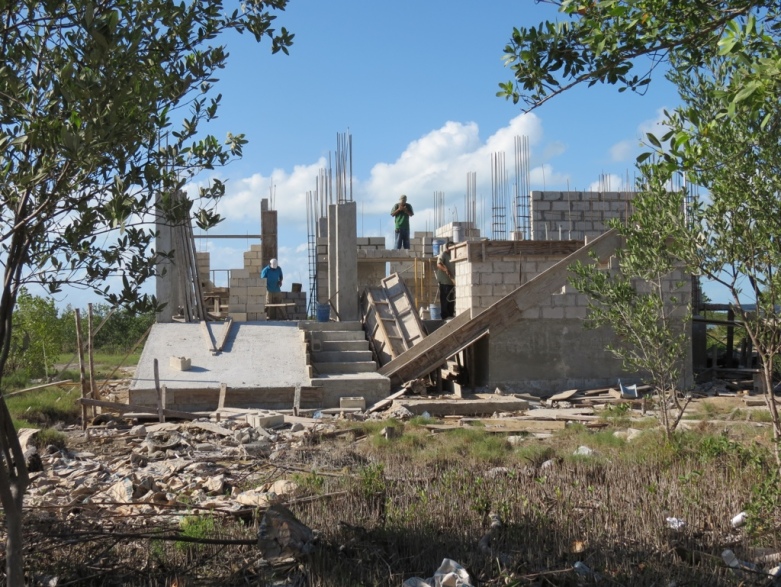 As we got closer we could see that form boards had been fixed for the next stage of the stairs and the steel rebar was being tied into place.

Ground Floor landing of the staircase.

A swift turn and we were confronted by the sight of the Ground Floor self-contained apartment’s kitchen/living room area’s southern full at it’s full height of twelve courses of blocks plus the beam. 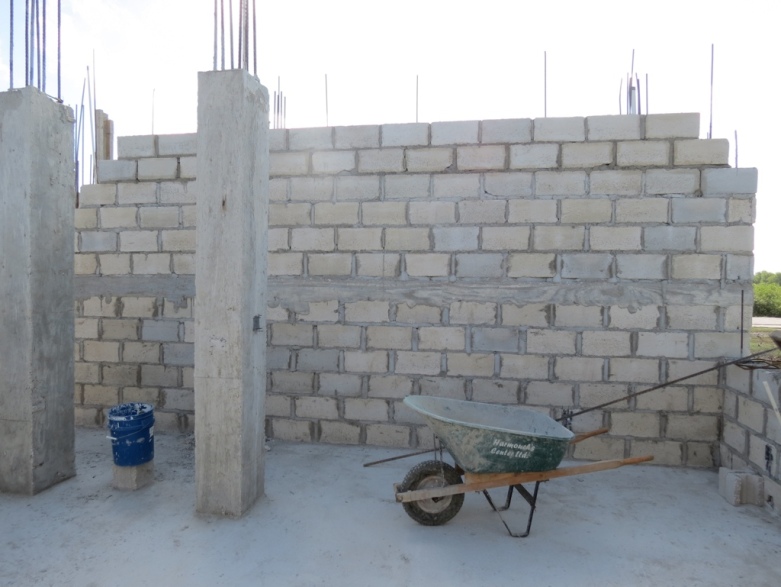 Concrete blocks were being laid on the eastern side of the kitchen in the self-contained apartment.

Can you give me a hand please.

The concrete blocks were also being laid for the northern external wall of the larger of the two en-suite bedrooms. 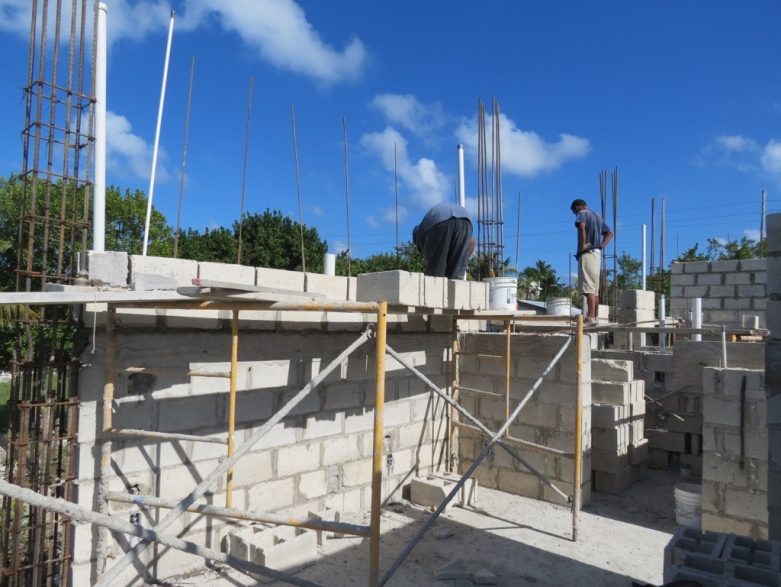 The framework for the double doors of the store room was being put together and it is here that you see recycling in action. Previously used boards and nails are used again and again. 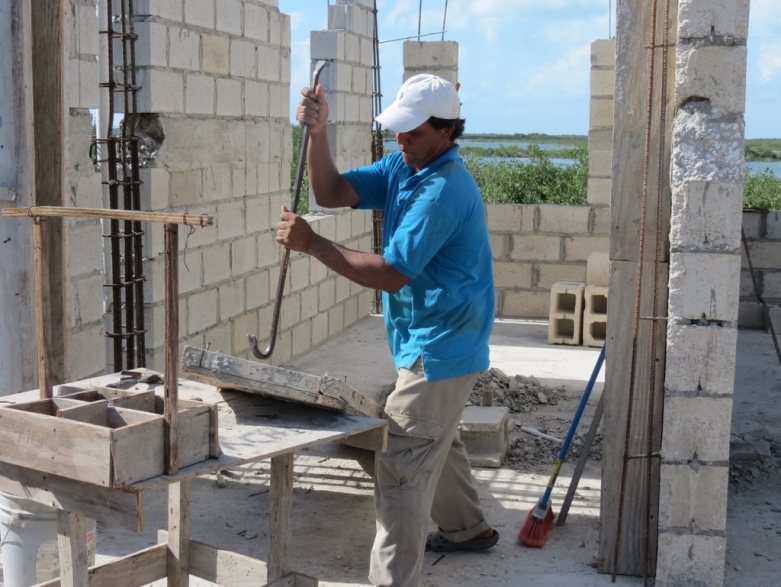 Let’s get the nails out. 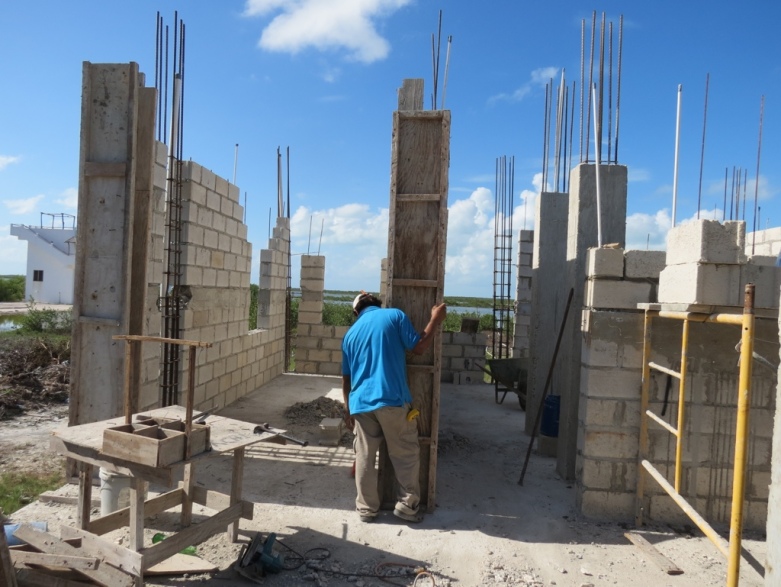 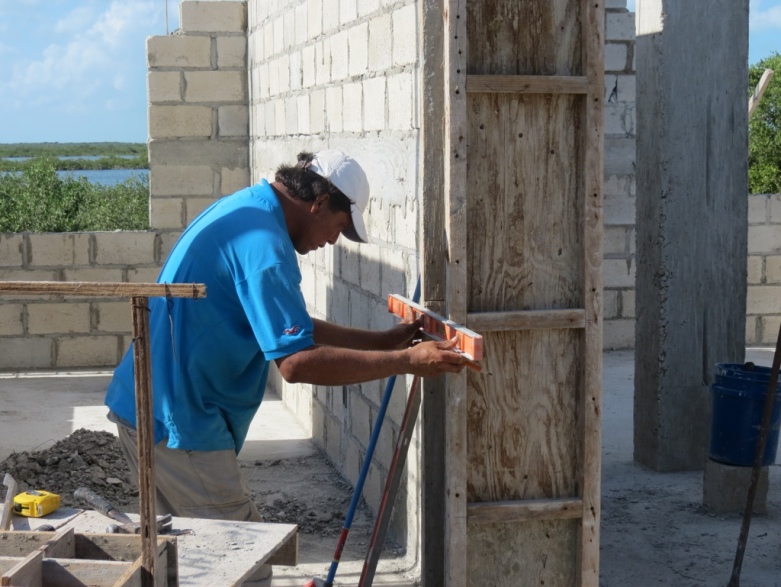 Framework for the double doors for the store room goes in.

The core team (the ‘A’ team) on our build in Ambergris Caye, Belize have been working very hard and I thought it about time that I ‘introduce’ them to you. And I will do so in the next couple of editions. Starting today we have: 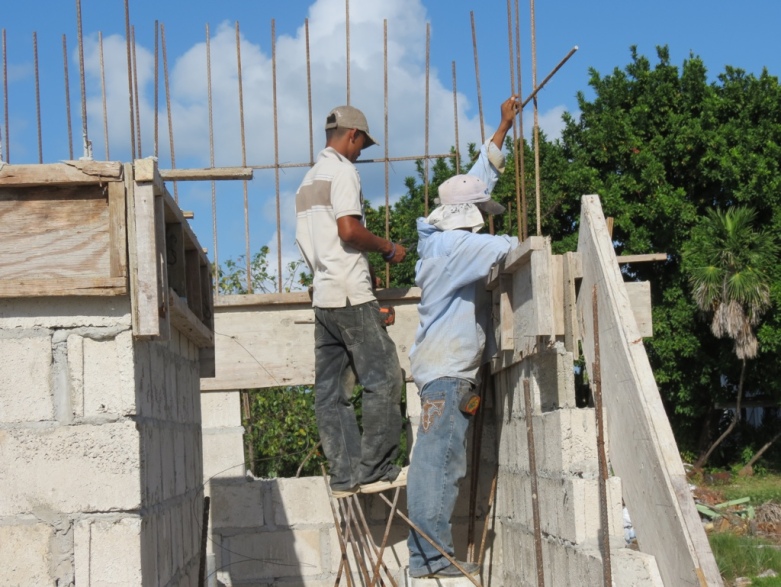 Eduardo to the left and Eric on the right.

The rest of the guys in future editions .

So, loads of concrete and steel going in today . Oh, and some wood.

I am off tomorrow for another visit to see Doctor Pedro Habet for more work on my teeth and in my absence Wednesday’s edition will be produced and published – as long as there is not another ‘no show’- by the Mystery Blogger.

Today’s headline is based on track number one of ZZ Top’s 1990 album Recycler. ‘Concrete and Steel’ reached number one in the Mainstream Rock Tracks’ chart.