Regular readers of this blog, the reason for its being is to record our build in Ambergris Caye, Belize, will recall from earlier editions, I am sure, that the foundations for our home – because of the low lying nature of our land in Tres Cocos- had to be built much higher than the plans stipulated.

One consequence was that the golf cart ramp had to be extended so that the gradient was not as steep. Well, when Rose and I visited the site yesterday evening, after I returned from the dentist, we noticed another couple of unwanted effects caused by the increased height of the foundations.

At it’s planned height it was possible to step up to the Ground Floor from ground level. This just isn’t possible now given the increased height of the foundations.

You would need a trampoline from ground level or mountain climbing boots to access the Ground Floor via the ramp.

Rose and I discussed the problem and decided that the solution is to allocate 2 foot nine inches of the ramp space for stairs. We considered other possible solutions but we thought that this one would be the easiest and least costly to implement.

When we got to our build in Ambergris Caye, Belize this morning we discussed the feasibility of it with Anhill and he agreed with our thinking. We also discussed the way that the stairs from the ground level to the Ground Floor would look if the concrete is poured into the forms as they are currently made up. Far too wide with the northern section serving no useful purpose ( it would have done had the height of the foundations not been increased).

We were still discussing the effects caused by the elevated height of the foundations when Daniel Camal, our building contractor, arrived and he joined the discussion and within a few minutes we agreed upon the solutions. 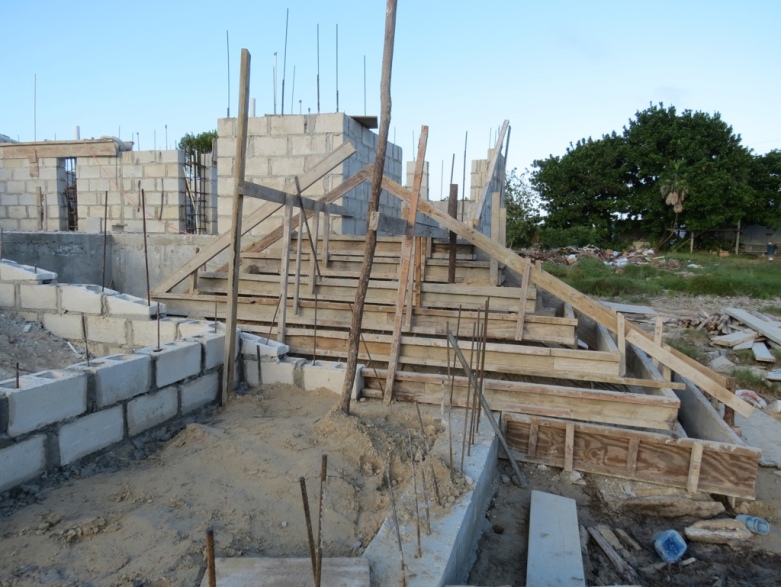 The forms to the left of the entrance ( left-hand wall) to the Ground Floor will now be removed.

As to the creation of stairs within the ramp area, they will have a width of thirty-three inches, a depth of twenty inches and the risers will be seven inches but these will not start until forty inches into the ramp.

The stairs will be created along the right-hand side of the ramp.

With the problems resolved Rose and I went home for a quick lunch. 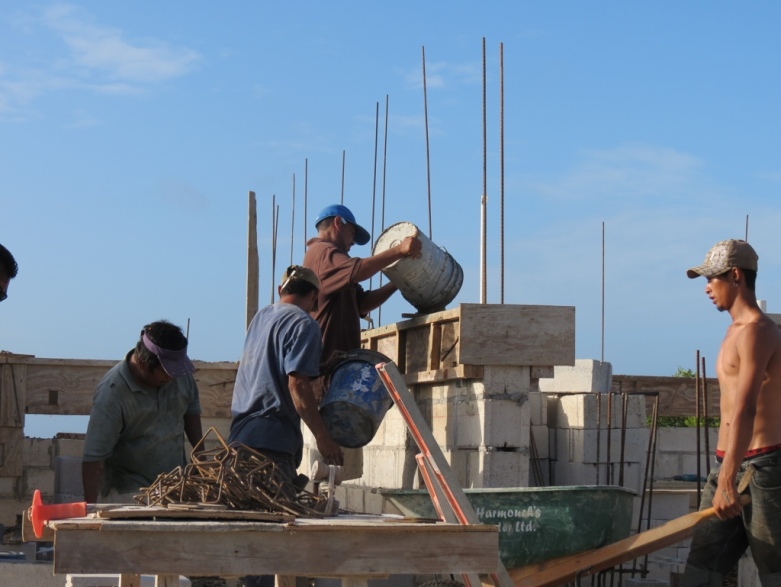 Pouring the concrete for the beam for the northern wall of the store room. 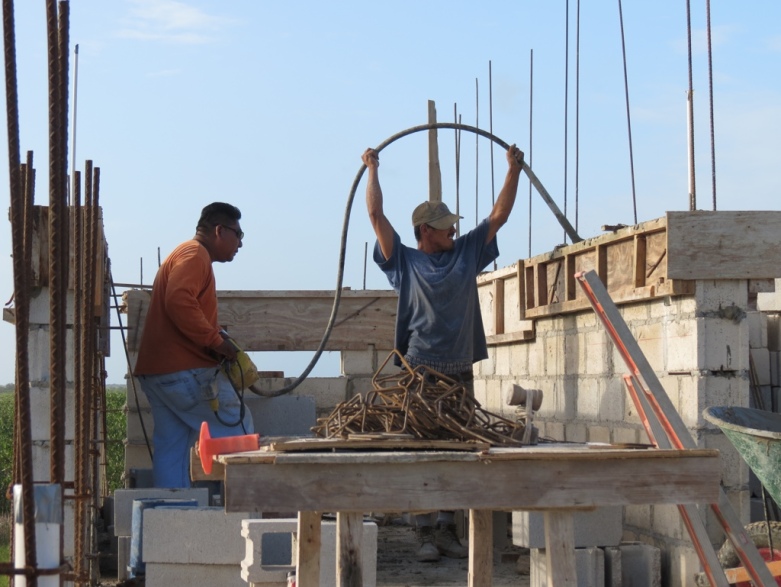 They then got to work with the trowel to level off the concrete. 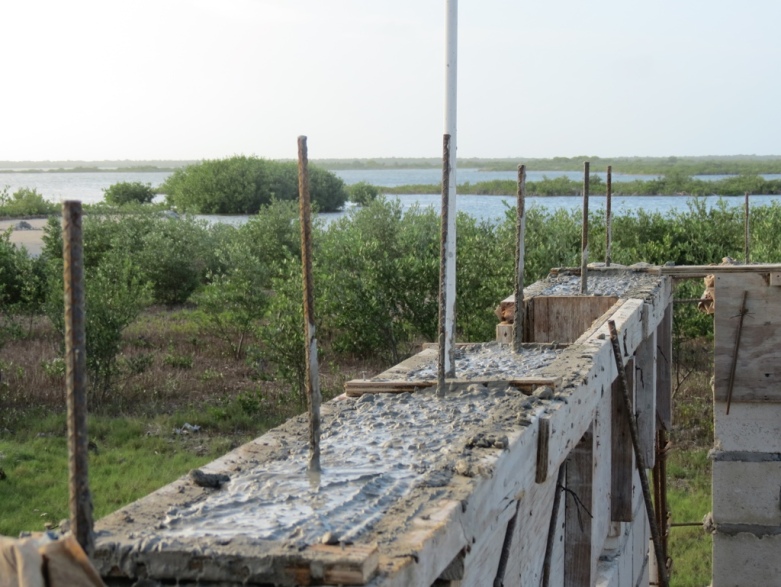 How it looks when finished.

I took the opportunity to see what the additional bathroom size looks like now that the first six courses of ‘blocks have been laid.

That’s big enough! The corridor to the left of the bathroom leads past the other bedroom into the kitchen/living room area.

For those of you that dread the word rebar close your eyes. It is a boring subject I know but, like it or not, rebar is an essential element of our build and they were getting ready for the next big use of it. 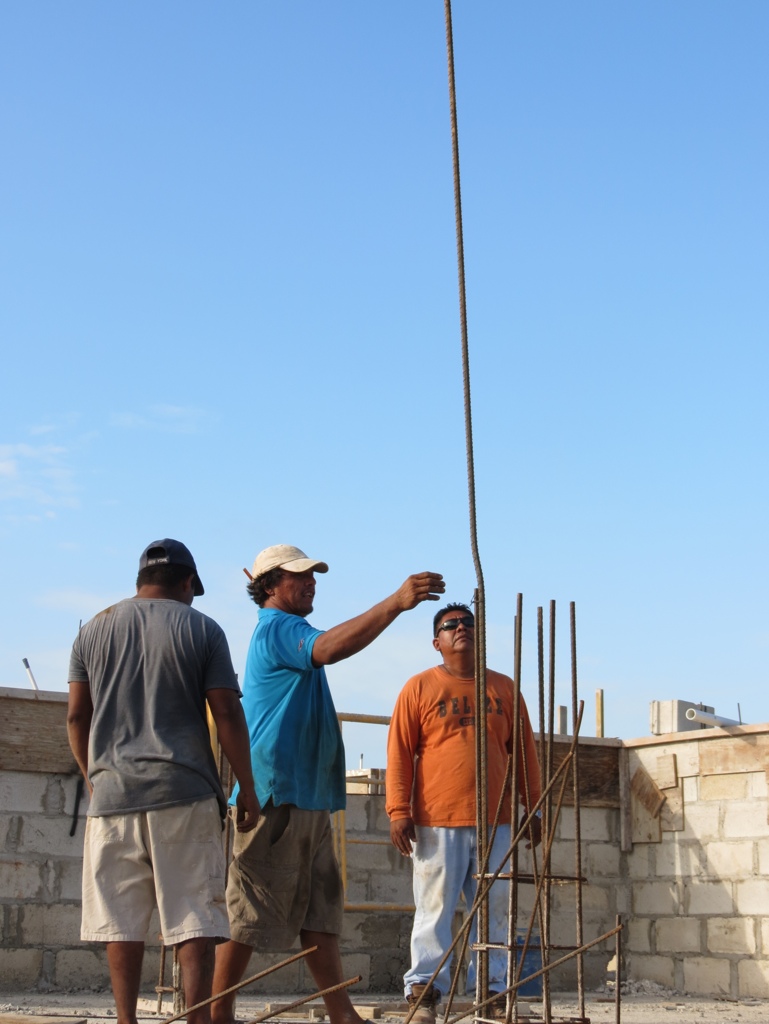 Testing the height of the rebar for the columns to support the ceiling of the Ground Floor/ floor of the First Floor. 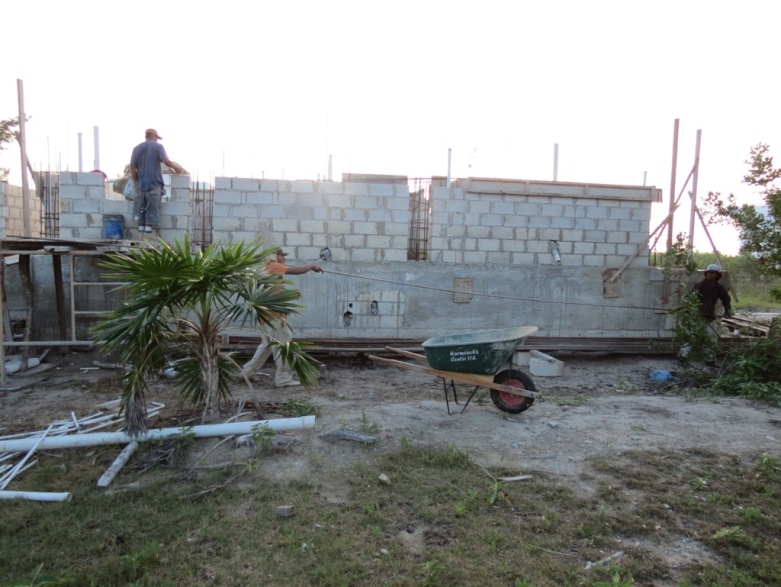 Stacking the rebar on the northern side of the house ready for use.

OK, you can open your eyes now.

The headline is based on the self-titled first album by Cause & Effect which was released in 1990.