As we come to the end of 2012 and week 8, or 20%, of the project time for our build in Ambergris Caye, Belize there is still long a long way to go but it has been a great year for us.

In seven months ( it seems much, much shorter) we have left the UK and started the build of our new home here in Ambergris Caye, Belize. Something that we dreamt of doing for years. Just goes to show that if you really want to do something and set your heart on doing it, you can.

We went to our build in Ambergris Caye, Belize today at around 10.45 am not really expecting to see a lot going on. It is New Year’s eve after all. Pleased to say that our expectations were totally wrong. There was lots going on.

The fact that there were nine guys on site surprised us . We had thought that at best the number would be between three to four.

As we parked the golf cart we could see that the stack of concrete blocks had shrunk materially and when we looked at the build we could see why. They were being stacked in piles on the Ground Floor. 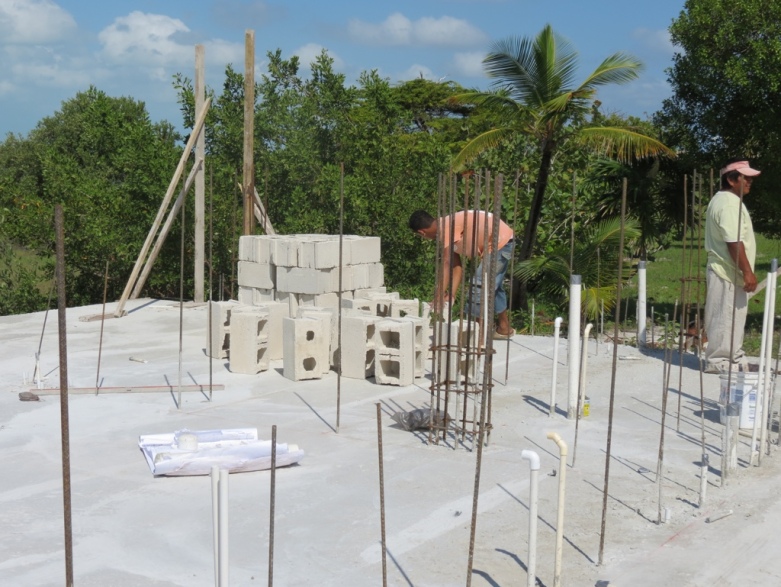 Anhill was on wheelbarrow duty ( he just cannot get enough of it!) and Eduardo was stacking the blocks.

Once on the Ground Floor they were stacked in piles close to where the walls will be built. 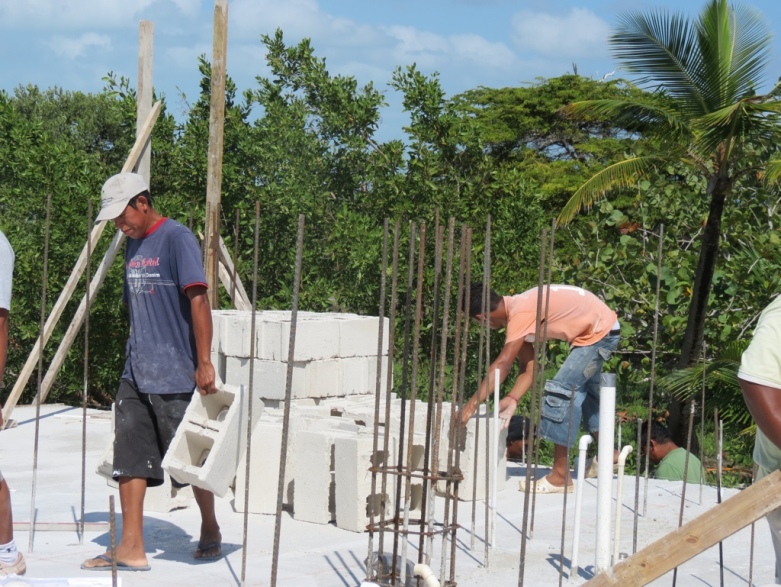 The blocks were stacked close to where the floor had been marked to show the wall line and wooden posts erected for the beginning and end of each wall.

Posts erected and blocks ready to be laid.

A red marker pen ( well looks like the work of one to me) or a chalk line had been used to signify where the walls are to be built.

If you look closely you can just see the marker line.

They had put extension pipes on the PVC pipes that the electric cables will run through.

Pipes extended prior to block laying.

We couldn’t believe that they had done so much in around half a day but there was more. They had also filled the area where the golf cart ramp will be with sand.

Nearly ready for the concrete pour.

With the wall lines marked out Rose and I concluded that we hadn’t got the design of our home quite right. We saw that the space to the south of the kitchen/living room area of the self-contained apartment could more sensibly be used. As another en-suite bedroom ( all potential guests take note).

The space in question is to the left of the piles of blocks.

Fortunately Daniel Camal, our building contractor, arrived and we were able to ask him if our idea was feasible and, if so, could it be accommodated without impacting seriously on the build time. We were really pleased when he told us that such a change is possible and would have little, to no, impact on timings. He is now going to work out a costing for us so that we can reach a decision. Providing that it is a reasonable price ( hope you are reading this Daniel) we will go for it.

Shortly after we spoke to Daniel the guys packed up for the day so that they could be prepared for their New Year celebrations . As far as we are concerned they deserved the ‘early away’.

When they had gone Rose and I took a walk around the Ground Floor imagining what it will look like when it is finished.

Rose imagining that she is about to walk through the apartment door.

We are going out this evening to bring to an and end what for us has been a fantastic year. We are going to thoroughly enjoy ourselves. So, no camera carrying for me. I, therefore, took a shot earlier today of the stage being erected in Barrier Reef Drive ( the front street) to send you all a message.

The headline includes the title of a song by ABBA which was a track on their 1980 album entitled Super Trouper.