The day stated very well for me. The Arsenal away match against Wigan was the early ( started at 6.30am) game on TV. Not the most assured or scintillating performance by Arsenal but they got the three points courtesy of a well executed penalty by Mikel Arteta.

With the game over I ate breakfast and then set off to collect Dave, a friend from the UK who has been the Squadron Sergeant Major of BATSUB (the British Army Training Support Unit Belize) since April of this year ( he beat us here by nearly two months, the rotter), from the 9am Water Taxi that he took from Belize City this morning.

When we went to monitor progress on our build in Ambergris Caye, Belize we took Dave and his colleague ‘Fish’ with us. When Dave had last visited Ambergris Caye we took him to look at the site for our new home. This was shortly after the scrub had been cleared but before the build had started.

How the site looked the last time that Dave visited it around 7 weeks ago.

How it looked today. Things have really shown progress. Well we think so.

The base boards for the forms for the concrete pour to create the ceiling of the water tank were virtually all secured by the time we arrived at our build in Ambergris Caye, Belize 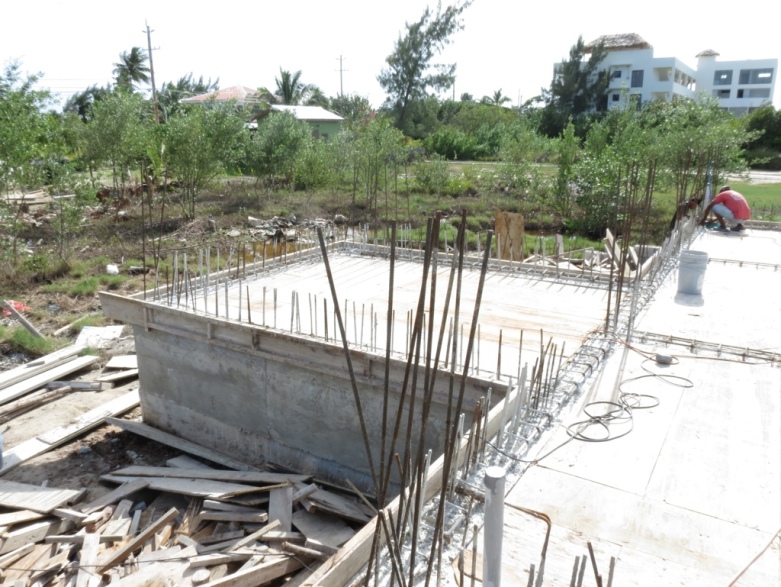 Boards fitted in the stair area.

When we got there the guys were fitting the boards in the final section which was the north-west corner of the water tank.

Martin placing a board.

Work was also going on filling the base of what will be the veranda to the Ground Floor bedroom with sand.

Alfredo on his ascent.

With most of the ceiling forms in place work began on putting the rebar in place.

Bringing the rebar in.

Nicholas pulling the rebar into position.

The rods of rebar in the south-east corner of the water tank were longer than the others so that they protruded . These bars will be bent to provide the strength for the concrete pour for the golf cart ramp. 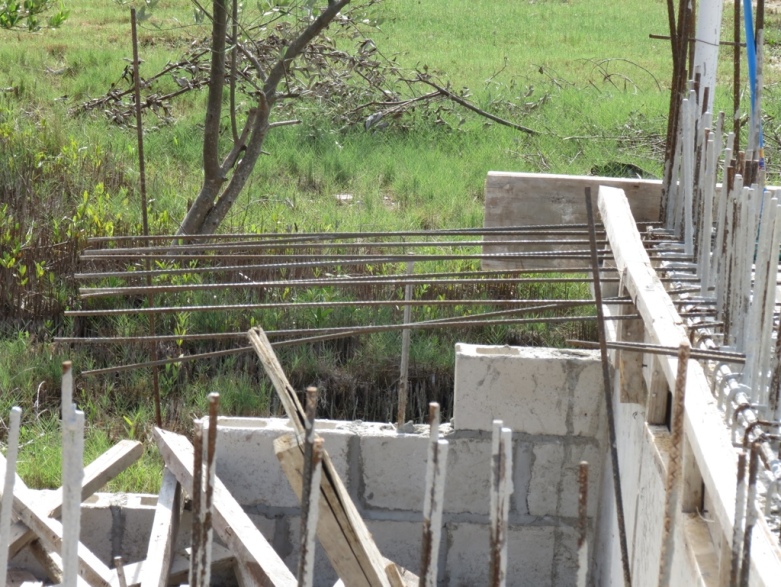 Rods in readiness for the concrete pour that will create the golf cart ramp.

They were placing the lengths of rebar with speed.

Within 10 minutes of starting.

Just before we left our build in Ambergris Caye, Belize they had started placing the bars north to south.

First north to south bar being put in place.

Some of the guys are working on Sunday to finish off the rebar so that – weather permitting – the concrete pour of the roof of the water tank can take place on Monday . So, more photos of rebar in the next edition!

The headline fed off ‘Work in Progress’ which is the title of a song by Alan Jackson released in 2002. The third single from his ‘Drive’ album. It made it to number 3 in the U.S. Hot Country Singles and Tracks chart and number 35 in the U.S. Billboard Hot 100 chart.