With no work on our build in Ambergris Caye, Belize yesterday I was denied my daily fix. Tried to substitute it with a look at the Sunset Boulevard project but , not unsurprisingly, didn’t get the same high. So am really pleased that the building site was ‘all action’ again today ( more about that later).

From comments/ feedback I have received ( all welcome) I sense that a good number of regular readers ( and perhaps some infrequent readers too) have a keen interest in the more technical aspects of our build in Ambergris Caye,Belize. So – although not by popular demand – I thought I would let you have a look at the blueprints that Daniel and his team are working to. I will do my best ( memory fails me sometimes – either age or the heat, or a combination of both) to include the relevant blueprint at each stage of the build.

In earlier editions I used a lot of words and perhaps even more photos when describing the piles required for our house. I never went into a lot of detail though as to what the dimensions of them should be nor where they had to be positioned . The blueprint below hopefully addresses my earlier oversight.

Work on the 25,000 gallon water tank ( as regular readers will know) has been going on for a few weeks now and I have tried to describe and illustrate how it will ‘sit’ under the structure of the house. The blueprint below will hopefully fill-in any gaps. 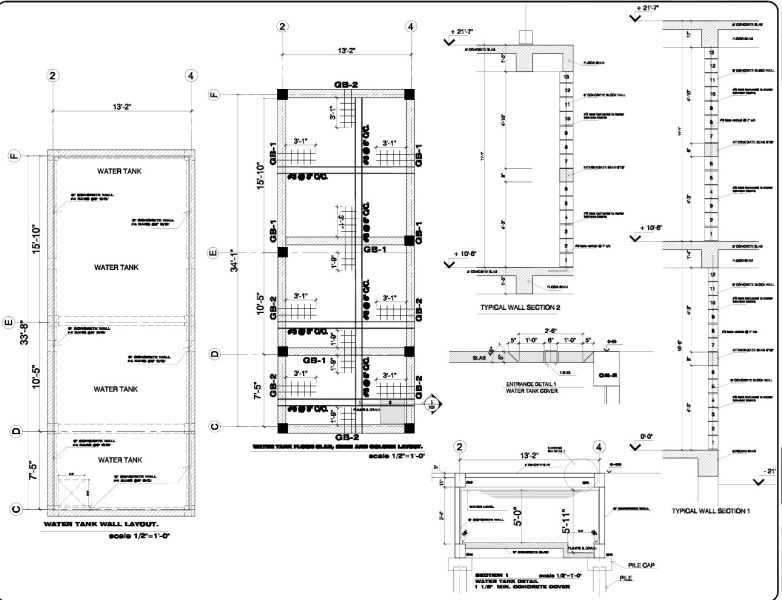 When we got to our build in Ambergris Caye, Belize this afternoon we could hear the hammers hammering and saws cutting wood so we knew straight away that work continued on putting the forms in place .

Nicholas at work with the hammer.

The walls of the forms were being put in place . 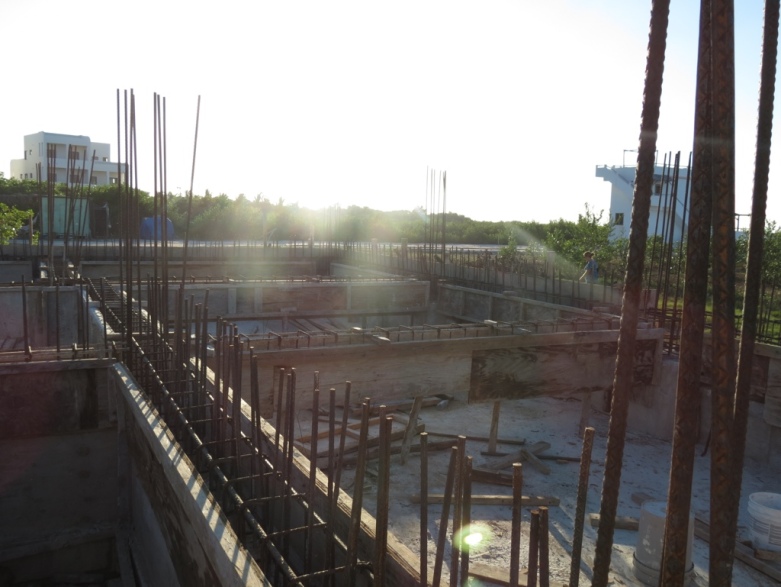 Form walls in place in the south-west corner of the water tank (apologies for the poor quality photo but the sun was starting to move around).

There were so many forms in place that it really did look crowded. And so different to the open space of just under a week ago.

Even so we could see that work was still going on fixing the remaining rebar frames into their positions.

Anhill and Alfredo fixing a frame in place.

All looked good but then we got the disappointing news that the remaining forms will not be fitted until tomorrow which means that the concrete pouring will not take place now until Wednesday. There is an upside though. Estel’s doesn’t open on a Tuesday but will be open on Wednesday for my early morning breakfast before going to the site to watch the pour.

The headline is influenced by’Blueprint’, a 2001 album by Jay-Z which was his forth consecutive album to reach number one in the US Billboard 200 chart.