“After the Lord Mayor’s show” is a saying in the UK which quite simply means that it is exceptionally quiet after an eventful and enjoyable time . An anti-climax. Well, that was today after the fun of the Christmas Charity Concert yesterday . And the fact that because it was a Sunday there was no work on our build in Ambergris Caye,Belize.

The day started with an overcast sky and a very strong breeze and was quite cool. Actually thought at one stage that I was going to have to get a sweater out. Great weather though for the youngsters of the San Pedro Sailing Club who took full advantage of the wind to develop their skills in the Optimist dinghies.

What do you do when you have been monitoring the build of your house all week and you have a free day? You go look at another building project, that’s what ( sad isn’t it).

Rose and I decided to see what progress has been made on the building of the Water Taxi Terminal and the Sunset Boardwalk which is a major development on what a short while ago was the site of the Saca Chispas Football Field and the ‘El Embarcadero’ area.

It is not an area that we have much call to go to. True it can be used as a route to our build and there are some shops there. It is also worth visiting to buy fruit, vegetables and fish but we tend to go to the north side of the island via Barrier Reef Drive because, more often than not, we have something to do or get in that part of San Pedro Town.

We were surprised to see how much had been done since we last went there. The road between Caribeña Street and Buccaneer Street is being laid.

Looks like it will be open for traffic soon.

Good progress had also been made with the laying of the path down the south side of the development . 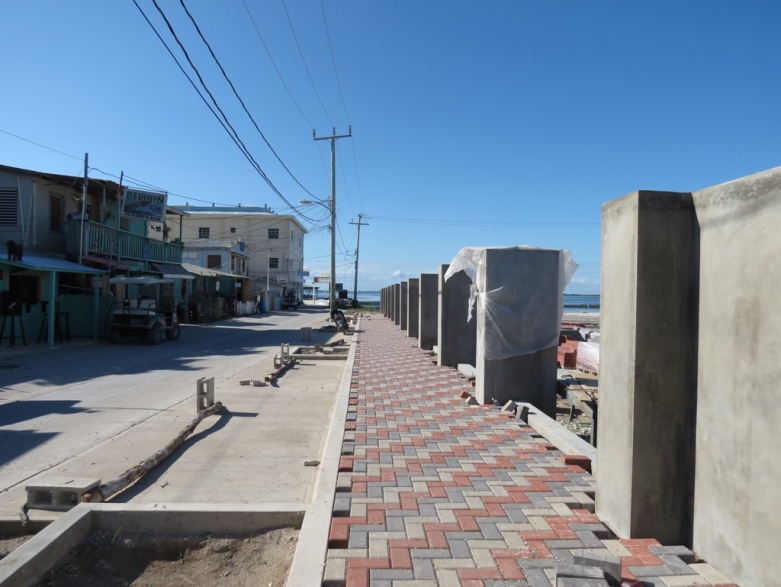 I thought we are using a lot of concrete but when you see the size of this project it puts it into perspective. This is a development that is budgeted to cost nearly $5.7 million. 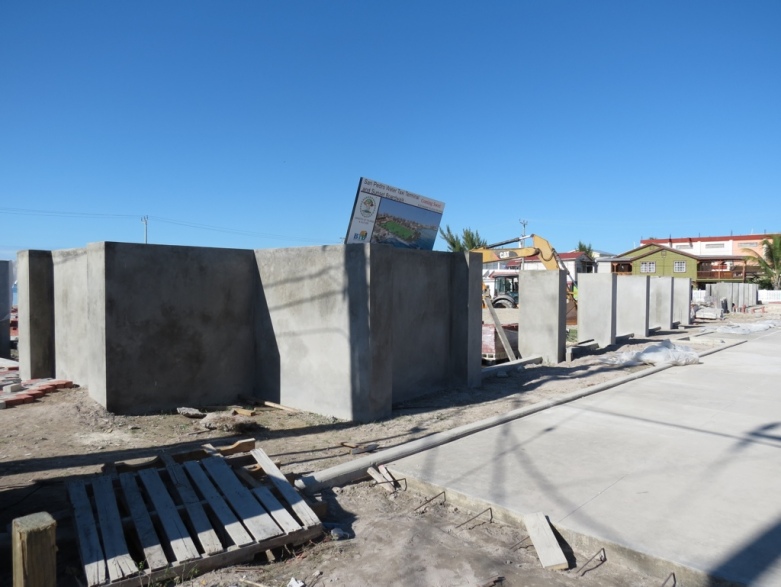 Concrete columns in place for the new buildings.

Lots of work has also been carried out on the sea wall which appears to be 100 feet plus ( didn’t have a tape with me) from the existing coastline .

What the development is intended to look like when completed around the end of next year.

We were impressed to see how much progress has been made but are more than happy with the progress that is being shown on our build in Ambergris Caye, Belize. Roll on tomorrow when work on it starts again,

By the time we had looked around the ‘Boardwalk project the sun was out and we decided to park the golf cart and go for a stroll along the beach . Whilst taking in the scenery we saw the common sight of a Guatemalan lady beach seller plying her wares of table clothes, throws, etc.

It never ceases to amaze me how they can carry such weights and size of bundle on their head. 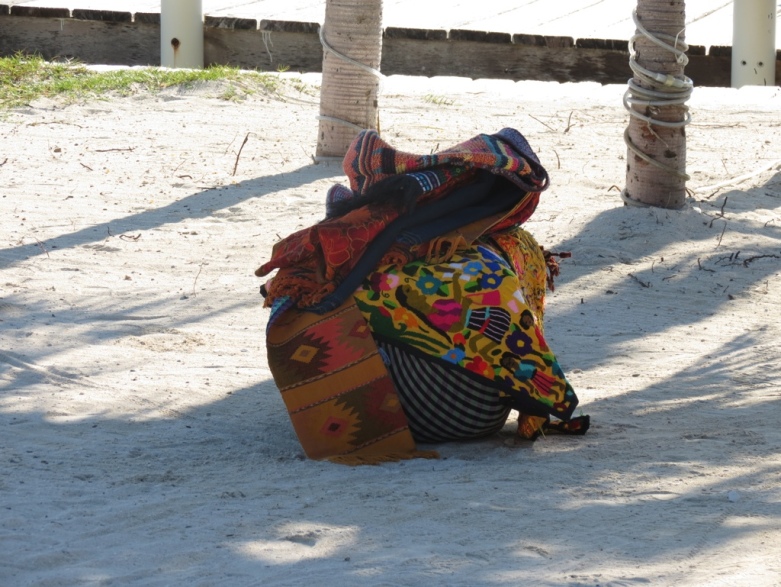 Carrying such a weight wouldn’t be – like Glen Campbell sang in 1967 – ‘Gentle on My Mind’!