For the build of a home there is a lot of stuff to be ferried in because although there are building supply stores on the island the range is not extensive and the prices will be higher. Far better to go to one of the builder merchants on the mainland or import, say from the USA, and then barge it from Belize City over to Ambergris Caye.

When considering our build in Ambergris Caye, Belize we had looked at project managing it ourselves. Had we done this it would have been us that would have employed the labour and ordered and arranged for the delivery of all materials.

We chose not to take this approach – even though we would most probably have reduced the cost of the project – because in all honesty we didn’t want the hassle of worrying if deliveries were made by the required time. Employing, and managing, staff. We also didn’t want to have to organise and manage site security for the materials.

We elected instead to go with an all inclusive price (OK this will change – upwards or downwards – if we change the specifications of our build and/or fittings/fixtures) and leave the ordering, delivery and security to Daniel Camal. This approach suits us but may not suit everyone but we are pleased that we have taken this approach.

Back to the barges though. As part of our research I looked at pricing for barging stuff in had we elected to project manage ourselves. Carrying capacities vary but the one I looked at could carry 120 tonnes and based on the number of trips that we would have required would have come in at around BZ$4,000 per trip. This per trip price included delivery to our land.

What price you manage to negotiate will be heavily influenced by a number of factors e.g. how many trips you want, how busy the barge company is, how well you negotiate, etc.

Oh by the way, the post I submitted to Tacogirl was approved by her and she published it today. I now know what it must feel like to win X Factor!

When we got to our build in Ambergris Caye, Belize today it didn’t look as if a lot had been done. Closer inspection ( or we just opened our eyes properly) revealed that a hell of a lot of rebar frames had been made and put in place over the existing vertical rods of rebar The frames, placed horizontally , will be pushed down and fixed in position to sit firmly on the concrete walls of the water tank before the water tank roof is poured.

Rebar frames running east to west across the water tank. 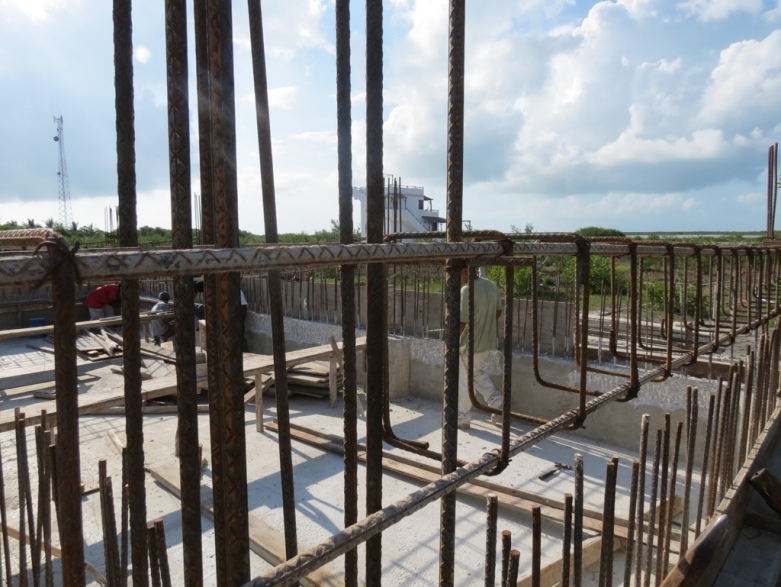 Close-up of a rebar frame just above the vertical rods of rebar.

Making sure that the measurements are correct for the board that will be fixed to the water tank wall. 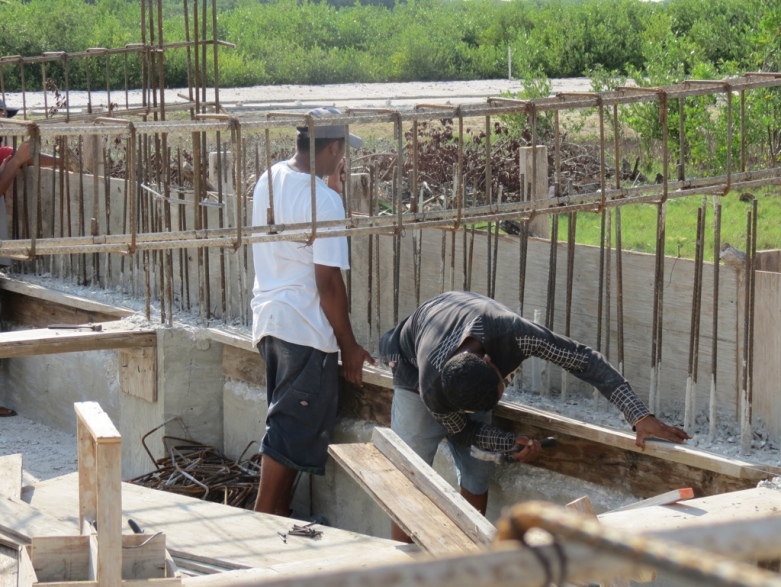 Measurements correct the board is nailed into place.

A fair amount of progress had also been made in fitting the support boards in place for the forms.

Support frames running east to west and north to south.

The guys have two working days to complete the preparatory work before the scheduled pour next Tuesday.

As an aside, Rose and I were quite pleased to see the price set for the house just a few lots from us – not that we have any intention of selling our house when it has been completed. Just reassuring to know.

Anyway, the three storey house, which has 6 bedrooms and 3 bathrooms, is up for sale at US$1,200,000. Now whether the ‘on sale’ price is achieved is another matter.

Neighbouring house up for sale.

The headline ‘feeds’ off of the song ‘When the Ship Comes In’ which is the third track of the 1964 The Times They Are a-Changin’ album by Bob Dylan . This one is definitely for the older readers.

It would be remiss of me to ‘close’ this edition without mentioning that there is a Christmas Charity Concert being held on the beach near Wayo’s Beachside Beernet starting at 4pm Saturday 15 December.

Choirs, bands, food, a raffle and a Chinese Auction with all proceeds going to the surviving children of Hector ‘Chapin’ Duran who died so tragically on 8 October.

If you are on the island do stop by and buy a ticket or ten . It’s for a good cause and you will have fun in return.