It was that time again to go to the Immigration Department to get our Visas renewed to enable us to stay in Ambergris Caye, Belize for another 30 days.

As has been the case previously , we experienced no problems whatsoever and the entire process was completed in 8 minutes. Seen to straight away in the Immigration Department where we got our reference numbers. Into the Treasury Department to hand over BZ$50 for each of our Visas. Then back to the Immigration Department to get our passports stamped. No hanging around at all. A new record in processing time. We now get to ‘stay just a little bit longer’ ( well, 30 days actually).

When we got back to our apartment I took a coffee on to the veranda and saw a local guy going for his Gatorade substitute ( apologies for the quality ( or lack ) of the picture, I only had my iPad with me).

Pouring the coconut water in to the jug.

From only 6 coconuts he got around three quarters of a jug. And, all for free!

After coffee Rose and I headed off to Pedro’s Hotel to watch the Bradford versus Arsenal game . Lunch was good but Arsenal lost so I have no more to say about this part of our day.

Aside that is that the game went to extra time and penalties so finished later than expected. The consequence being that we arrived at the build around 4.30pm in a dispirited mood.

Our build in Ambergris Caye, Belize though cheered us up immediately.

The guys were approaching the end of their long (and hard) day but were, as always, very friendly and pleasant when we arrived.

We could immediately see from the work that had been done today that the pouring of concrete for the walls of the water tank will take place tomorrow.

All internal forms were in place.

Elevated internal view of the western and southern sides of the forms. 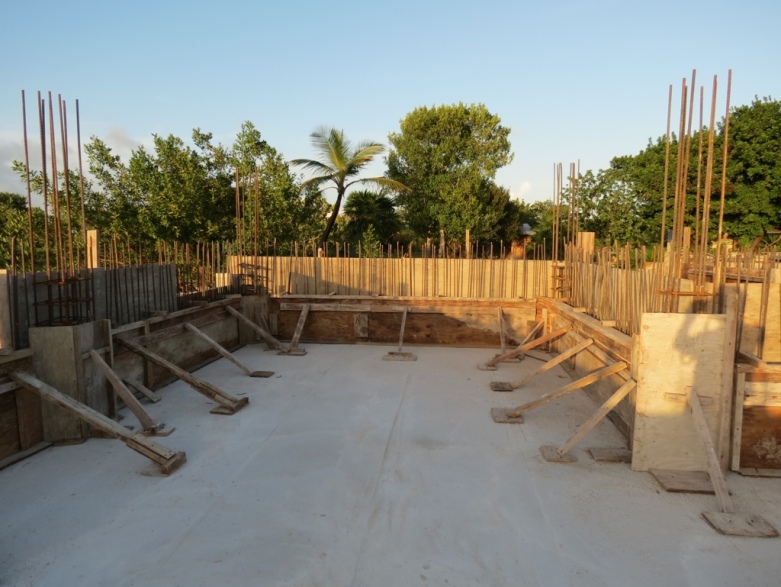 Forms in place on the north-western ( where the Ground Floor bedroom will be) corner of the house.

Forms completed for the eastern side of the house.

Final work on the northern side of the house.

They were also double checking the measurements for the form work.

Nicholas making sure that it is right.

Given the elevated height of the water tank it is necessary to use ramps for the wheelbarrowing of the concrete and these were in place. 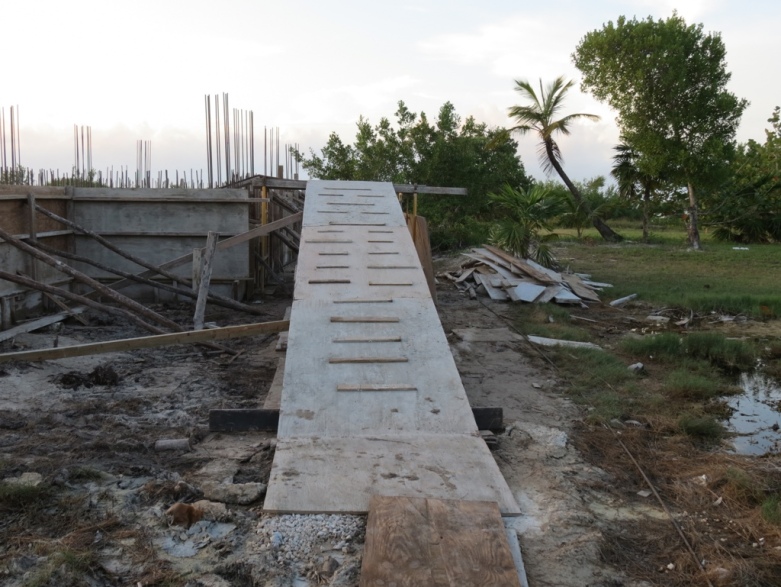 The concrete pouring for the walls of the water tank for our build in Ambergris Caye, Belize starts tomorrow at 6 am so that they can take advantage of the cooler temperature. My plan is to be at Estel’s by 6 am ( they start serving at this time) to have a quick breakfast and be at the site by 6.40 am latest.

The headline was influenced by ‘Stay’ which is a single released by The Hollies ( group from Manchester, England) in 1964. It was their first hit and reached number 8 in the UK singles chart.

The group at that time included Graham Nash who later left to join forces with David Crosby and Stephen Stills ( Crosby, Stills and Nash) who were then joined by Neil Young ( Crosby,Stills, Nash and Young) to become a folk rock supergroup ( this bit is for an avid reader in the UK ( well I hope he is an avid reader!).