Bet the headline got your attention. Well more about that later.

Got up this morning at 4.50 all set and eager for the pouring of the concrete for the water tank . All 40 feet by 40 feet of it.

I didn’t want to cramp the guys space at the beginning of the shift and believing that they were going to start at 7am I went to Estel’s for breakfast before heading to the site. Got there a shade before 7am ( I like to take my time when I get up in the morning) and was finished breakfast ( scrabbled egg, bacon, potatoes and wheat tortilla plus black coffee) by 7.30am. Needed to make sure that I was ready for the big – and long – day ahead.

Got to the build at 7.45am only to find that not only had they started pouring but had been doing so since 6am. Teach me to take my time in the morning!

The first thing I saw after locking the golf cart ( it never pays to take a risk, even on your own land) was the guys filling up buckets of sand, crushed stone and water.

The cement mixer was in full swing.

And the concrete was being poured into the wheelbarrows. 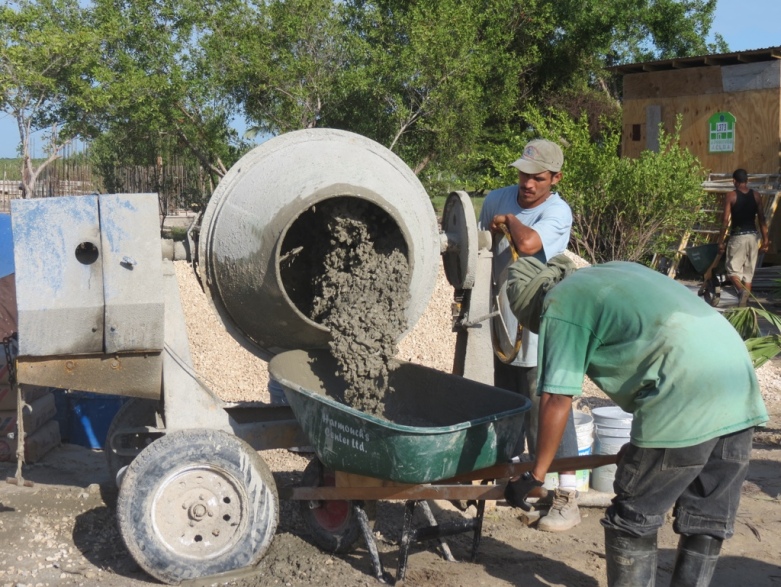 Note wheelbarrow one in the background on the 150 feet walk to the further most point of the pour.

By the time I got to the site they were already well underway with the pouring of the concrete for the water tank base that will be beneath the living/kitchen area of the Ground Floor apartment.

The guy in the rust coloured sweat top is Daniel Camal our building contractor . He got his hands ‘dirty’ too.

The wheelbarrows continued to arrive at a very speedy pace. Amazing given the heat even at that time in the morning. 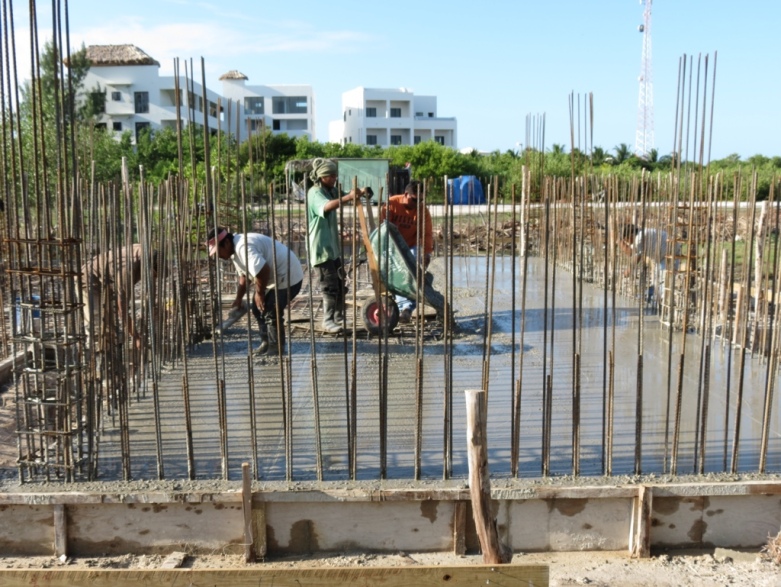 After vibrating the concrete was given a smooth finish with a float.

I stayed until the first section had been finished and then went to collect Rose.

When Rose and I got back to the site they were still hard at work – all 15 of them, including Daniel Camal- and were by now tackling the second section ( the water tank that will sit immediately beneath the store room and golf cart parking area).

Busy at work on the second section. 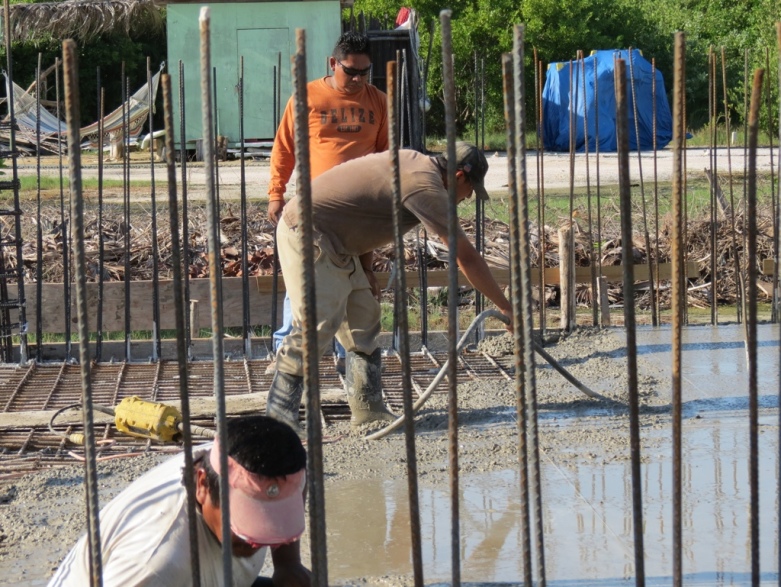 Work was progressing very well and at noon the lunch break was called. Chicken, rice and beans for all of the guys courtesy of Daniel Camal with soft drinks bought by Rose and I. These were purchased from Jason our next door neighbour who runs Pirate Villa and Pirate’s Treasure Restaurant and Bar. It pays to keep in with your neighbour !

Fed and ‘watered’ the guys were back hard at work within 20 minutes and all was going well when trouble struck when the cement mixer could not be started. Numerous attempts were made to get it going again but to no avail. Daniel left the site and returned around 40 minutes later with a new spark plug. Within 10 minutes of his arrival the ‘mixer was at full blast again.

The extended break had probably not done the guys any favours because I am sure that their muscles must have tightened but you wouldn’t have thought so because they were back in action straight away.

They worked solidly on the final section and at 3.17pm the concrete from the final wheelbarrow was poured by Junior ( not too sure that this is his real name but he is the youngest member of the team). 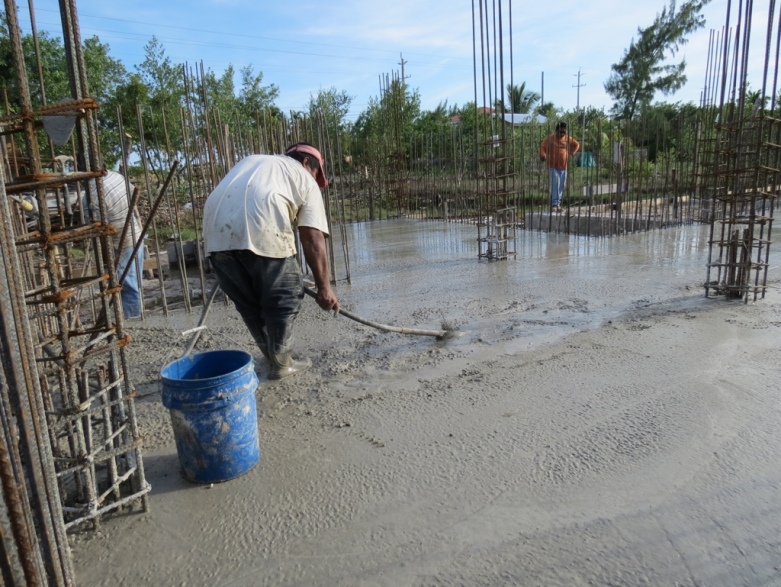 The floor of the water tank was finished.

To give you a break from the concrete here are a few more photos ( some you may have seen before but not at night) of Christmas decorations around San Pedro Town. 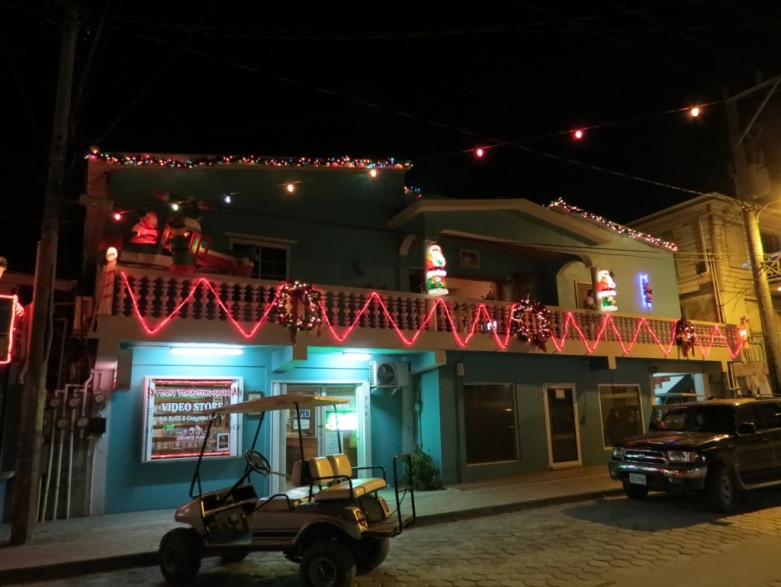 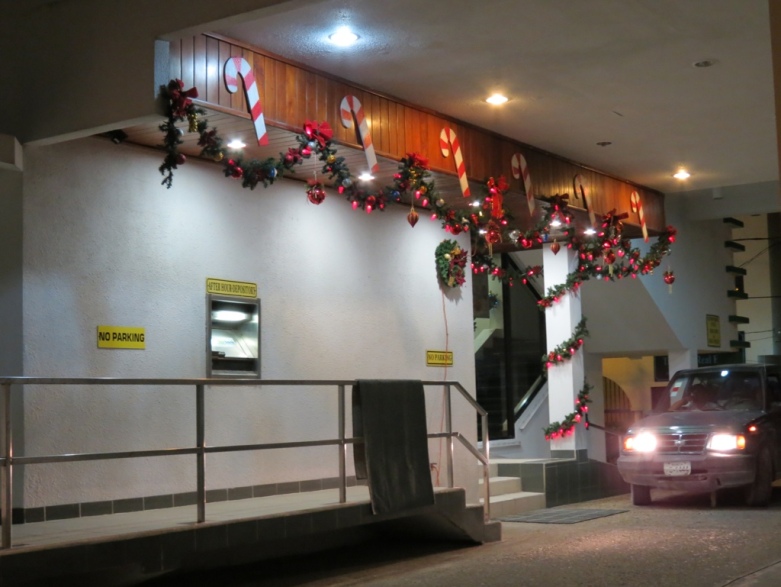 The final mention though must go to the guys on the build. Rose and I are full of admiration for the skill, hard work and effort of all of the guys and thanks to them we well and truly ‘got laid’.