“November Rain” reached number 3 in the US Billboard Hot 100 chart in 1992 for Guns N’ Roses and was written by Axl Rose.

So why use this as the headline ? Well because it seems like it hasn’t stopped raining here in Ambergris Caye for the last few days. And when it rains,it rains.

Appropriately dressed for the weather.

When Rose and I first came here 14 years ago a downpour like we experienced yesterday would have flooded most, if not all, of the roads. Since then there has been an investment ( OK not as much as it could/should have been) in paving many of the roads and this has virtually eradicated the problem of flooding on the main roads.

This isn’t the case for many of the secondary roads – some of which are well used – such as Blake Street which leads to and from the Belikin/Crystal Water Depot.

Approach road to the ‘Depot from the east.

As an aside, it is to the Belikin/Crystal Water Depot that I go for our drinking and cooking water. You pay a BZ$25 refundable deposit for a 5 gallon container ( you take the empty back for a full one) and then BZ$3.25 for 5 gallons of water. We could have it delivered to our apartment for BZ$4.80 but while I can do it myself I will.

Business must go on no matter what the weather.

Beach sellers setting out their wood carvings after the rain.

We headed north to see what work, if any, was taking place on our new home . We expected the roads there to be badly flooded but they were not as bad as we had expected. 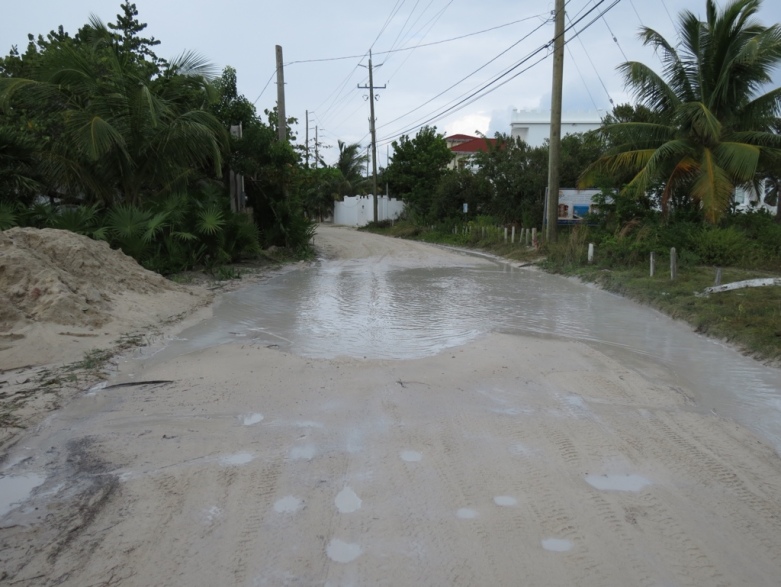 Road in front of our property looking north.

We slushed our way onto the building site to pleasingly see that work was going on . The guys were finishing off fixing the forms and laying down duck boards ( planks for non UK readers) to run the wheelbarrows over when the pouring ( rain permitting) of concrete takes place on Friday.

Boards in place for the wheelbarrows.

The rain started again so we put on our waterproofs and got on our way home quickly but en route decided to stop off at BC’s for a Belikin. Just in time as well because the heavens really opened up. 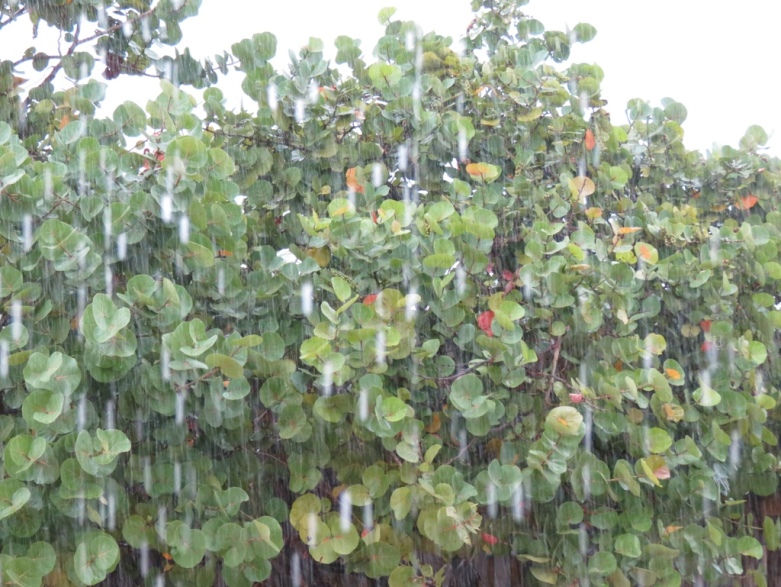 Pleased to be looking out at the rain.

Whilst in BC’s we took advantage of catching up with island news by reading the weekly newspaper, the San Pedro Sun. A newspaper which, because of its exclusive interviews with John McAfee, is now known by most of the newsrooms around the world.